The catfish that strands itself to kill pigeons 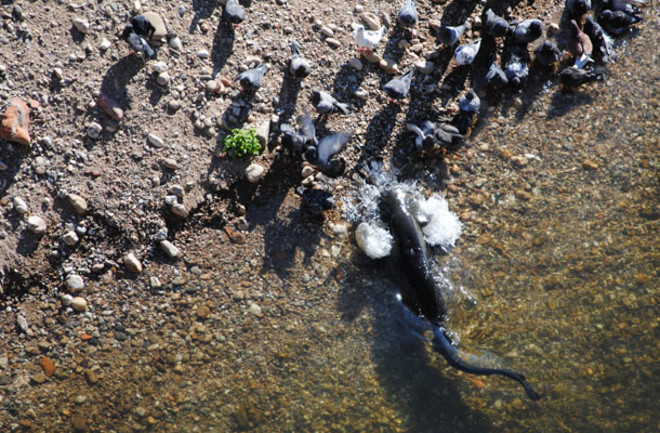 In Southwestern France, a group of fish have learned how to kill birds. As the River Tarn winds through the city of Albi, it contains a small gravel island where pigeons gather to clean and bathe. And patrolling the island are European catfish—1 to 1.5 metres long, and the largest freshwater fish on the continent. These particular catfish have taken to lunging out of the water, grabbing a pigeon, and then wriggling back into the water to swallow their prey. In the process, they temporarily strand themselves on land for a few seconds.

Other aquatic hunters strand themselves in a similar way, including bottlenose dolphins from South Carolina, which drive small fish onto beaches, and Argentinian killer whales, which swim onto beaches to snag resting sealions. The behaviour of the Tarn catfishes is so similar that Julien Cucherousset from Paul Sabatier University in Toulouse describes them as “freshwater killer whales”.

Alerted to the fishes' behaviour by local fishermen, Cucherousset watched them from a bridge overlooking the island. Over the summer of 2011, he filmed 54 attacks, of which 28 percent were successful.

Catfish get their name for the long, sensitive whiskers (or ‘barbels’) on their upper jaws, and the Tarn fishes would erect theirs when they were hunting pigeons. This, combined with the fact that only moving pigeons were ever attacked, suggests that the fish are sensing the vibrations of birds that approached the water.

Chucherousset collected samples of the catfish, as well as the three animals that they eat—pigeons, crayfish, and smaller fish. All of these prey have different levels of carbon and nitrogen in their bodies, and Chucherousset used these to show that individual catfish varied in whether they hunted pigeons, and those that did ate fewer fish.

For the moment, this stands as an interesting example of unusual behaviour. Chucherousset doesn’t know why these particular catfish started stranding themselves to kill pigeons, or whether they particularly benefit from doing so.

The European catfish is an alien, introduced into the Tarn in 1983, and currently flourishing there. Is it possible that these invaders have eaten too many local fish and are forced to seek sustenance elsewhere? Does this explain why it seems to be the smaller catfish that go after pigeons? Or is it that the smaller individuals are less likely to be permanently stranded on shore, or expend less energy in wiggling back into the water? Why, essentially, is a bird in the mouth worth being a fish out of water?