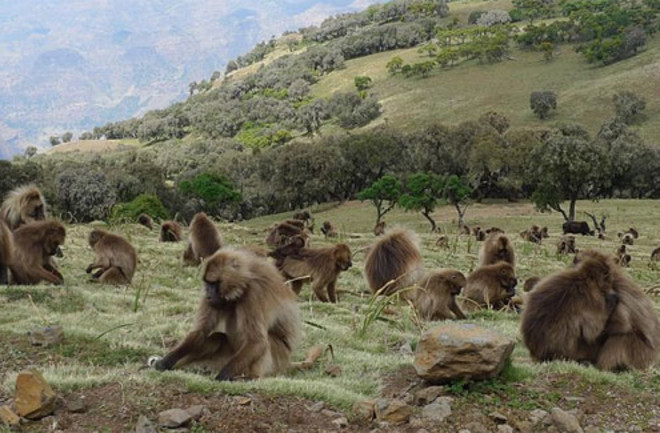 On a grassy Ethiopian plateau, revolution and death are underway. The plateau is home to a group of geladas – shaggy, grass-eating, and occasionally terrifyingrelatives of baboons. They’re like a cross between a cow, Animal from the Muppets, and your nightmares.

Geladas live in units where a single dominant male lords over several related females, whom he monopolises as mates. It’s an enviable position, and males often have to fend off takeover bids by eager bachelors. If a newcomer ousts the chief monkey, it’s bad news for the group’s females. A wave of death sweeps through the unit, as the new male kills all the youngsters whom his predecessor fathered. Indeed, babies are 32 times more likely to die after a takeover than at any other time.

But that’s not all. Eila Roberts from the University of Michigan has found that the new male’s arrival triggers a wave of spontaneous abortions. Within weeks, the vast majority of the local females terminate their pregnancies. It’s the first time that this strategy has been observed in the wild.

The trend of aborting babies in the face of strange males is known as the Bruce effect. That’s not a slight against men of that name; the effect is named after the scientist who discovered it – Hilda Margaret Bruce. In 1959, she noticed that pregnant mice will abort if they’re exposed to unfamiliar males. Since then, scientists have found the same effect among other laboratory rodents, and domestic horses.

But the Bruce effect has always remained a quirk of captivity. No one really knew if wild animals do the same thing. There have been anecdotes involving various monkeys (including geladas), but no solid records or experimental evidence. Two studies with wild rodents failed to find any evidence for the Bruce effect.

But Roberts has changed that. She has spent five years studying geladas in Ethopia’s Simien Mountains National Park, including 110 females from 21 groups.  She found that groups where a male had taken over had a very different schedule of births than groups whose lead males stayed in change. In the six months before a takeover, all the groups were very similar. In the six months after, the groups with a new male gave birth to significantly fewer babies – just 2, compared to 36 in other groups.

But that’s just indirect evidence. Roberts wanted to know which specific females were pregnant, and whether they actually gave birth. To do that, she collected faecal samples from the geladas to measure the hormones in their bodies. These chemical cocktails gave away the identities of the pregnant females.

Altogether, Roberts identified 60 pregnancies, 9 of which ended prematurely. Of those nine, eight took place in the weeks after a male takeover. Normally, the failure rate for gelada pregnancies is around 2 per cent. If a new male arrives, it shoots up to 80 per cent.

It’s obvious why the incoming males kill any existing infants. Female geladas don’t become fertile until they stop raising their existing children. Assuming no abortions, they go for three years between pregnancies. That’s longer than the typical reign of a dominant male. So, a newcomer, having finally won the right to mate, has few opportunities to actually do so. To make things worse, his females are busy raising someone else’s children. His solution: kill the babies. The quicker he does this, the sooner the females become fertile again, and the sooner he can father his own children.

But why would a pregnant female abort her own foetus? Roberts thinks that it’s an adaptive tactic in the face of a new male’s murderous tendencies. Since the male would probably kill the newborn baby anyway, it’s less costly for the female to abort than to waste time and energy on bringing a doomed infant to term. Her future offspring, conceived more quickly and fathered by the incumbent king of the hill, will stand a better chance of survival.

This is one concrete example. It’s still not clear how widespread the Bruce effect is among mammals. As Roberts showed, proving it is very difficult, and few scientists can afford to collect faecal samples from a large population for many years.