“I can see its tail,” says David Attenborough, perched on a small boat. “It’s coming up... it’s coming up! There! The blue whale!” Ever since I first saw The Life of Mammals, I've always remembered Attenborough’s joy at seeing the “largest animal that exists or has ever existed”. I now know how he felt. On Monday, off the southern coast of Sri Lanka, my wife and I had the privilege of seeing five blue whales. And not just a gray bump in the far distance, as with many whale-watching trips. Two of them swam within 30 metres of the boat, which, as it happens, is about a blue whale’s length away. They stuck around too, getting closer and closer and gracing us with several minutes in their company.

You cannot talk about blue whales without launching into a litany of breathless stats (see blue whale facts at the bottom). Thirty metres in length. 180 tonnes in weight. Able to eat half a million calories in a single mouthful. A heart the size of a small car. A major artery so big that a child could fit in it. It’s so big that the so-called “pygmy blue whale” – the Indian Ocean subspecies that we most likely saw – is so-named because it only grows to 24 metres in length. But there’s a difference between reading the numbers and seeing one in the flesh. The first sign of a blue whale is the spout of water that issues forth from its blowhole when it surfaces to breathe. The spout is 9 to 12 metres tall – easy to spot from a distance. The whale stays at the surface for a few minutes, taking repeated breaths. One of the animals we saw did a couple of rolls, possibly to clean itself. Here’s one half of its tail.

Then, it dives. That’s when you really understand. As its head angles downward, and its arching back breaks the surface in a smooth roll, it just keeps on going. And going. And going. By the time the tail comes up, you start to wonder if this animal is ever going to actually end. Once it’s gone, it’ll stay that way for around 8 to 10 minutes, swimming 100 metres or so below the surface in search of krill. You check your watch, and 8 to 10 minutes later, you scan the horizon again for that spout. 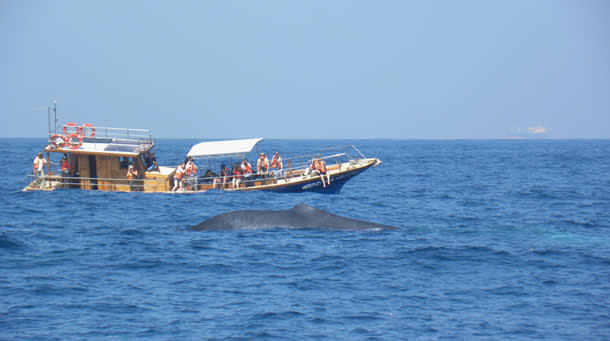 To give you an idea of the animal’s size, the photo above has one next to a tourist boat. That tiny dorsal fin lies near the tail, about three-quarters down the whale’s body. You see it when the whale dives. So, if you imagine a massive tail in line with the back of the boat, there’s still a huge amount of whale pointing downwards. Most of its head is well out of the frame of the photo. 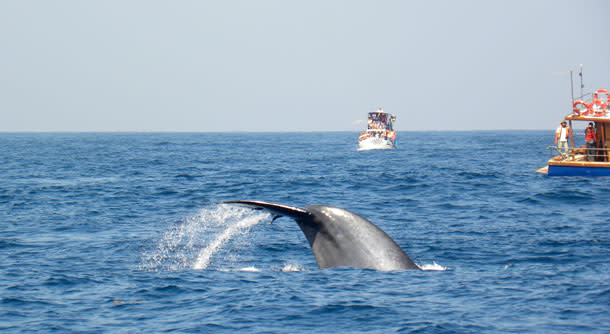 We sailed with Mirissa Water Sports, the first company to run whale-watching trips in the area and still the best. It’s an offshoot of the Build a Future Foundation, which tries to provides opportunities for young Sri Lankans in areas that had been devastated by the tsunami of 2004. Sri Lanka has only recently become a hot whale-watching destination, largely thanks to British marine biologist Charles Anderson. Around a decade ago, Anderson hypothesised that blue and sperm whales migrate from the Arabian Sea to the Bay of Bengal, passing by the south coast of Sri Lanka on their way. The frequency of sightings ever since seems to confirm his idea. At the time of our trip, the crew had seen blue whales on all but one day in February. 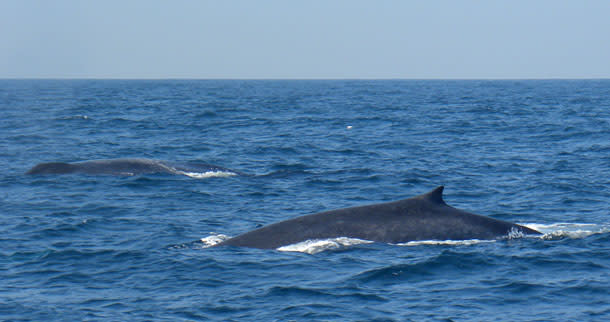 But don’t be deceived by the regular sightings: these magnificent animals are endangered. Counting such an elusive animal is obviously tricky, but the IUCN puts the global total at somewhere between 10,000 to 25,000 individuals. That’s between 3 and 11 per cent of their numbers in 1911. Hunting took a big toll on the whales, but it has now been banned internationally. Still, there are other threats. Large ocean vessels sometimes collide with the whales, and their noise might make it harder for the animals to communicate. Here’s a final photo to remind us of how closely the paths of humans and blue whales often intersect.