The Birth of the New, The Rewiring of the Old 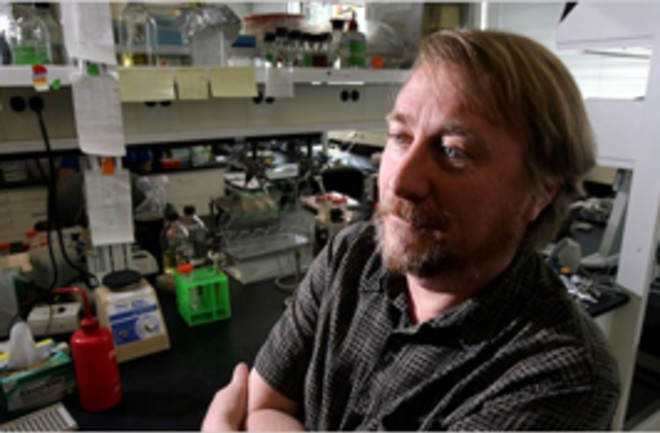 In 1988, Richard Lenski, an evolutionary biologist now at Michigan State University, launched the longest running experiment on natural selection. It started with a single microbe--E. coli--which Lenski used to seed twelve genetically identical lines of bacteria. He placed each line in a separate flask, which he provisioned with a scant supply of glucose. The bacteria ate up the sugar in a few hours. The next day, he took a droplet of microbial broth from each flask and let it tumble into a new one, complete with a fresh supply of food. The bacteria boomed again, then starved again, and then were transferred again to a new home. Lenski and his colleagues have repeated this procedure every day for the past 24 years, rearing over 55,000 generations of bacteria. I first reported on Lenski's experiment 12 years ago, and since then I've revisited it every few years. The bacteria have been evolving in all sorts of interesting ways, and Lenski has been able to reconstruct the history of that evolution in great detail, thanks to a frozen fossil record. Every 500 generations Lenski and his students sock away some bacteria from each flask in a freezer. They can thaw out these ancestors whenever they wish and compare them to their youngest descendants. Biotechnology has improved drastically since 1988, giving Lenski an increasingly powerful evolutionary microscope. When he started out, it could take months to identify just one of the many mutations that arose in each lineage. These days, he and his colleagues can sequence an entire E. coli genome for a few hundred dollars and find every single new mutation in its DNA. Four years ago, I wrote here about one particularly fascinating episode in the evolution going on in Lenski's lab. It started in 2003, when the scientists there noticed something odd in one of the 12 flasks. It had become much more cloudy than the others. In a microbiology lab, that's a sure-fire sign that the bacteria in a flask have experienced a population explosion. At first the team suspected that some other species of bacteria had slipped into the flask and was breeding quickly. But they found that the flask was packed with E. coli—descendants of the original ancestor that Lenski had used to start the entire experiment. Somehow the bacteria in this one flask had evolved a way to grow much faster than the other bacteria. The scientists determined that the bacteria had made a drastic switch: from feeding on the glucose to another compound, called citrate. Citrate is an ingredient in the broth where Lenski's E. coli grows. It's not food; instead, it helps keep the minerals in the broth in the right balance for E. coli to grow. To a microbiologist, the emergence of E. coli that can eat citrate in a lab is deeply weird. E. coli typically can't feed on citrate in the presence of oxygen. Some strains of E. coli can draw in citrate, but only if there's no oxygen around. To make the reaction work, they have to pump out another compound called succinate at the same time. The ability of E. coli to feed on citrate in the presence of oxygen is extremely rare; it occurs when E. coli picks up the necessary genes from other species. In its normal environment (inside us), natural selection must not favor these mutants. Scientists have been studying E. coli in labs for over a century, making it the most intensely studied species, on Earth (as I explain in my book