The Biology of Sourdough

Does America's most famous bread owe its flavor to a unique ecosystem? 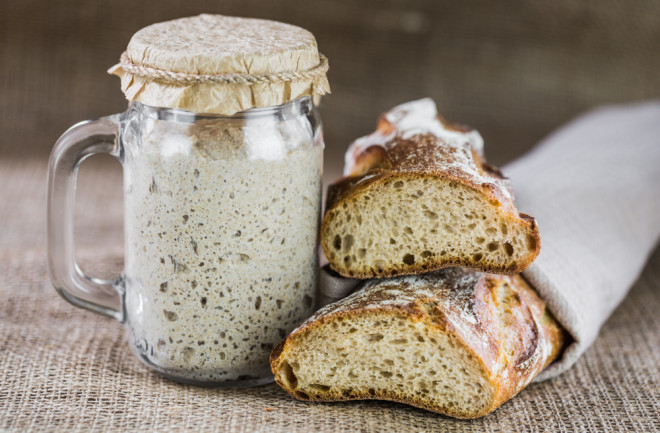 Sourdough is teeming with bugs — some 50 million yeasts and 5 billion Lactobacilli bacteria in every teaspoon of starter dough. (Credit: Zagorulko Inka/Shutterstock)

About 34 years ago, Frank Sugihara recalls, he and Leo Kline, a fellow microbiologist, set out to "solve the mystery of San Francisco sourdough." The two scientists were working with baker's yeast in a Bay Area lab run by the U.S. Department of Agriculture, so perhaps it was inevitable they'd wind up studying San Francisco's signature bread.

This crusty loaf, with its chewy bite and sharp acidulated tang, was a long way from Wonder Bread, and few tourists left the airport without a loaf. Local lore attributed the bread to Basque migrants from the Pyrenees who arrived in San Francisco during the gold rush. Local bakers swore that no one could reproduce it outside a 50-mile radius of the city. When they gave dough to bakeries elsewhere, it inexplicably lost its "sour." But was it — is it — truly unique?  Sugihara laughs. "It's hard to say."

The Ancient Tradition of Sourdough

The practice of making sourdough is as ancient as bread itself. For 5,000 years or more, humans have mixed flour and water, waited for the mixture to ferment, and when it was good and sour and full of gas, used it as leavening to make dough rise. They found that they could propagate their leavening by saving a bit of unused dough to sow the seeds of foment in the next batch.

No one knew then that these "seeds" were actually living microorganisms — it was Louis Pasteur, in the mid-1800s, who showed that fermentation was caused by microbes. That knowledge led to the commercial production of baker's yeast, strains of Saccharomyces cerevisiae bred for speedy growth. Today baker's yeast rules. It makes short work of pumping carbon dioxide into dough, and it always delivers.

Still, the old, slow bread-making ways didn't disappear. Sourdough, for example, not only survived in San Francisco — it has gained new respect from artisanal bakers and sourdough hobbyists.

"Here's a sourdough bâtard from Artisan Bakers in Sonoma," says Danielle Forestier, a French-trained master baker in Oakland, just across the bay from San Francisco. "I'm checking the package," she reports over the phone. "It's made of unbleached flour, water, and salt. Three ingredients, lots of taste, great texture." Yet a typical supermarket white bread has more than 25 ingredients and additives and still tastes vapid.

The difference is those fermenting bugs. The baker's yeast in supermarket bread creates a virtual monoculture of S. cerevisiae. The sourdough bâtard, on the other hand, is a product of natural fermentation involving wild yeasts and bacteria. Almost all the bacteria are lactobacilli, cousins of the bacteria that curdle milk into yogurt and cheese. "These lactobacilli outnumber yeasts in sourdough by as many as 100 to one," Sugihara says. It's the acids they make that give sourdough its tartness.

Not only that, say European researchers, the bacteria also contribute carbon dioxide as well as aromatic compounds that infuse bread with flavor and delicious smells.

Keeping a sourdough culture alive requires good time management and something like affection. An ecosystem begins to form as flour mixes with water to make a starter dough. Enzymes in the flour split starches into sugars. There are swarms of yeasts and bacteria everywhere — in the flour, in the environment, and on the baker. They converge on the sugars "like a rabble," says Jürgen-Michael Brümmer, former head of baking at the Federal Institute for Grain, Potato, and Lipid Research, in Detmold, Germany. Not to worry, he says: The bugs will sort themselves out, and the "bread friendly" ones will come out on top.

Natural Gas A sourdough begins with only flour and water, left to ferment. The resulting starter (A) is thick with wild yeasts and bacteria. A little starter is set aside for the next batch, then more flour is added to form a dough (B). The microorganisms feed on its sugars, forming carbon dioxide, acids, and ethanol. After fermenting at room temperature (C), the dough is chilled until use.

As lactobacilli convert sugars to lactic and acetic acid, the dough noticeably sours, going down to the pH of mayonnaise, around 3.8. Most microorganisms drop out of competition at this point, but yeasts that tolerate acid come into their own and convert sugars into carbon dioxide and ethanol.

Gas bubbles and fruity smells signal that fermentation is under way. Served regular meals of flour and water — "refreshments" in sourdoughspeak — selected organisms will multiply day by day. By day six or so, the culture should teem with bugs and be ready to raise dough. Not all the culture is used, and the remainder is fed flour daily so it can live on to make bread another day.

A well-fed culture can last years. "I call it microfarming," says Rick Kirkby, at the Acme Bread Company in Berkeley.

In their landmark San Francisco sourdough studies, Sugihara and Kline showed how nicely yeasts and lactobacilli live together. The principal yeast they found now goes under the name Candida milleri, and the principal bacterium, a species never found in nature before, is called Lactobacillus sanfranciscensis.

Unlike baker's yeast, C. milleri is exceedingly tolerant of the acid that the bacterium produces. What's more, C. milleri doesn't digest maltose, one of the sugars derived from flour starch. This is unusual for a yeast, and lucky for the bacterium. L. sanfranciscensis, it turns out, can't live without maltose. That tight, mutually helpful relationship may have allowed some San Francisco bakeries to keep their sourdoughs alive for more than 100 years.

Once scientists knew what to look for, they started finding L. sanfranciscensis in starter doughs in other countries — in French levains and German Sauerteigs, for instance, and in the dough for Italian panettone. Wherever it shows up, says Michael Gänzle, a microbiologist at the Technical University of Munich in Germany, it probably comes from bakers' hands.

What to make of the claim, then, that San Francisco sourdough can't be authentically made elsewhere? Will a San Francisco starter stay true to form in, say, New York? Many bakers contend the culture will lose its zip. "Local bugs join the party, and before long you've got Lactobacillus newyorkensis," says Jeffrey Hamelman, director of the baking education center for King Arthur Flour in Vermont.

Perhaps. Cultures are dynamic. Mess with their living conditions — room temperature, mealtime, brand of flour offered — and they will change. But how much? An ongoing project in France may offer a clue.

"Generally, we find the yeasts stay the same," says Bernard Onno, a French microbiologist looking into the biodiversity and dynamics of sourdough. But in stable, established cultures, he says, "the lactobacilli vary — not the species but the ratios between the species in the dough."

Perhaps, then, if you transplant San Francisco sourdough to New York, you should expect some reshuffling within the bacterial inhabitants. The culture, however, isn't always to blame for taste changes. "Fifty percent of taste comes from culture," Onno says, but the other 50 percent comes from savoir faire — the baker's craft.  "I think you can make San Francisco sourdough pretty much anywhere," Sugihara says. "It's such a self-protective system." Now 82, he still consults for bakeries around the world.

"They do a good job of sourdough in Japan," he says, "but they mainly sell it to foreigners." He has also persuaded one large Japanese bakery to perk up its white bread with a shot of sourdough. "They call the bread My Heart," he says with a chuckle. "As in 'I left my heart in San Francisco.' "