The Big Debate Over the  Oldest Life on Earth

One researcher says he has the oldest fossils ever found; another says that's just mangled, pressure-cooked rock. 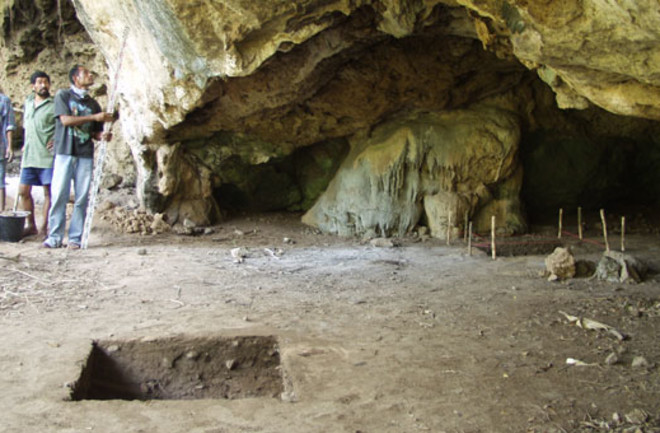 Northern Australia has yielded the oldest fishhook. Carved from the base of a snail shell, it dates back some 16,000 years. | Courtesy Sue O'Connor

­The first shot across the bow came in 2002, when Oxford paleontologist Martin Brasier challenged the authenticity of what were then widely regarded as the fossil remains of some of Earth’s first life-forms. In the bargain he took on one of paleobiology’s great lions, J. W. “Bill” Schopf of UCLA, who made that find and still defends it. “It was like tackling Jesus or Moses,” Brasier says.

Now Brasier has emptied his second barrel. In August he and David Wacey of the University of Western Australia staked their own claim to a candidate for the oldest known fossil: a set of Slinky-shaped cells found on an ancient beach in western Australia, just 20 miles from the site of Schopf’s discovery. Brasier asserts that his fossilized cells are the remains of primitive anaerobic bacteria that lived 3.4 billion years ago. Schopf’s samples, he believes, are just ancient, patterned rock, with no fossils at all.

Settling the debate matters a great deal. At its heart is one of the biggest questions in science: When and where did life begin? Brasier’s find suggests that life on Earth started not near some oceanic thermal vent but rather in a warm, oxygen-depleted bath near the surface. It also bolsters the case that there once was life on Mars.

Both scientists used light- scattering lasers to dust for chemical fingerprints, but Brasier bundled several techniques to attain detailed 3-D images. He found sulfur, carbon, and nitrogen, suggesting biological origins. Schopf detected carbon too, but Brasier argues that it is unrelated to life. Schopf counters that no one has ever found carbon in the geological record that is not a remnant of life.

Context may matter just as much as chemistry. Schopf’s cells were free-floating in rock like raisins in raisin bread. Brasier’s fossils appear in tangled clumps stuck to sand grains. “And that’s much more what biology does,” he says. “Bacteria cluster together in great populations.”

Schopf, 70, stands by his fossils as “the most thoroughly studied —by the most workers, using the largest array of analytical techniques that have provided the greatest assemblage of relevant data in the history of science.” Naturally, Brasier disagrees with that, too. It will be up to their small group of colleagues to resolve the debate, or to make it moot by finding something even older.