Each species of tiny peacock spider has a unique, dramatic abdomen and courtship display. 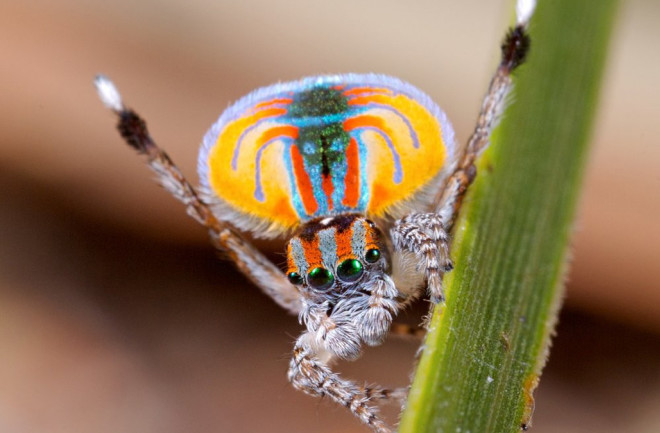 This article appeared in the March/April 2021 issue of Discover magazine as "Dream Weaver." For more stories like this, become a subscriber.

In the Australian spring of 2005, photographer Jürgen Otto encountered his first peacock spider.

“I almost stepped on it,” he recalls. “It leapt off — but not before I snapped a photo.”

It was a male Maratus volans, then just one of seven named species of peacock spider. Endemic to Australia, peacock spiders are part of the largest spider family, Salticidae (jumping spiders). And they are active predators — meaning they hunt their prey, rather than ensnaring it in a web. Jumping spiders are instantly recognizable by their quartet of forward-facing eyes, and peacock spiders, specifically, by their dramatic abdomens and courtship displays.

What stunned Otto was the “strikingly colorful” abdomen, flattened and spread like a fan, which had been widely assumed — since the species was first described in 1874 — to allow the spiders to fly. Spurred by mounting evidence to the contrary, Otto set off to dispel the myth. Fifteen years later, what he’s recorded is far more spectacular: The peacock spiders’ dance is now appreciated as one of the most mesmeric and sophisticated courtship rituals in the animal kingdom.

After his first encounter, it took nearly three years of scouring scrublands before Otto found his next Maratus male. Nearby, he spotted a subtle, brindle spider — and the male was transfixed. Could this be a female? Camera at the ready, Otto witnessed what was, “in all likelihood, a first for science.”

We now know that a typical Maratus courtship begins when a male spots a female and declares his presence. He raises his third pair of legs, gloved in white, to the sky before dancing in a zigzag toward her, legs lifting and dropping, his entire being rattling in an M.C. Hammer-esque scuttle.

With bravado matched only by grit, he is not dissuaded by her lack of interest. When she’s not watching, he switches to syncopated abdominal vibrations. If he unduly persists, she might mimic the dance, perhaps insinuating that she is a rival male. (In at least one species, Maratus vespertilio, territorial males will engage in ritualized but harmless fighting called “hopping contests,” reminiscent of puppies jostling with their own reflection.) If she’s hungry, a female may attempt to kill a male with a lethal pounce. But a courting male — whose dexterity is heightened by the charge of lust — can sidestep the blow.

A curious female may investigate the miragelike fan: It’s a jarring distortion of reality — is it food? A predator? Or something else? To human onlookers, for instance, the patterned Maratus volans fan appears like the primal abstraction of a spider, but how does it appear to her?

“One perhaps imitates a wasp face; another species, an owl; but we just don’t know what she is thinking,” says Otto. “Maybe she sees beauty. It could just be fashion. What do people think when they see bell-bottom trousers?” He denies her curiosity, waving his fan right and left to obscure the compelling image, a move that might force her closer for a better view.

“He’s no machine” or robot running a program, Otto says. “People coo at these spiders’ colors, their cuteness, but we underestimate their intelligence.”

When it is time, he will flourish his fan. Maratus fans are shimmering mosaics of scales that clash reds and yellows against blues, using sunlight to create rainbow hues and even “super black.” Super black is an effect created by unique scales whose microstructure extinguishes over 99 percent of light to create surreal voids, making other colors appear more brilliant.

If this courtship seduces her, his genes — and hers — will be passed on to their offspring. In doing so, she has ensured that her sons will carry on the dance, and her daughters the taste in partners.

Zooming out, we can see how this dance has evolved through the cumulative scrutiny of female Maratus past. Over countless generations of sexual selection, they have inadvertently crafted, with ever-refining discernment, the very spell for their own bewitchment.

This ritual has captivated more than spiders. Since Otto’s first encounter in 2005, the number of identified Maratus species has jumped from seven to 85. The last seven were added this year by 22-year-old Joseph Schubert. His first sighting: “It was like striking gold.”