The Battle Over the Tamarisk Tree

Ecologists seek balance as one non-native species eradicates another. 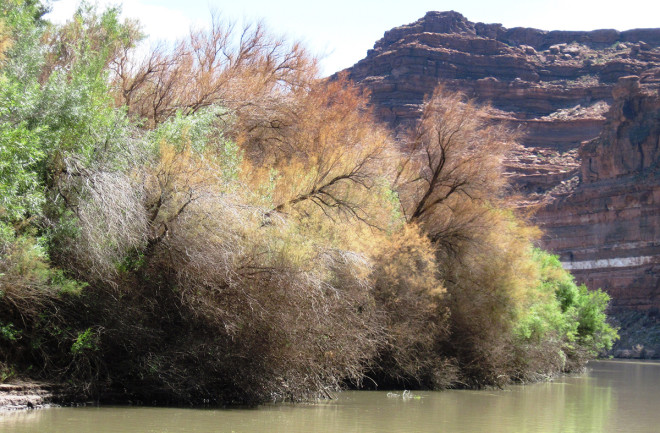 Dead tamarisk trees along the Colorado River and other western waterways. Invasive beetles brought in to control their spread have sparked controversy. (Credit: Courtesy of the Tamarisk Coalition)

It’s a hazy Sunday morning in early July as Levi Jamison pulls to the side of the road in central New Mexico. He grabs a camera, clipboard and thick canvas insect net from the blue Volkswagen van that is his traveling home and office, and begins to hike along an irrigation ditch just east of the Rio Grande. A seemingly unending thicket of tall, shrubby tamarisk trees parallels the ditch. He stops just a few feet in, picks a tree at random, and sweeps the net over the dusty-green leaves exactly five times. Then, he peers into the canvas, quickly counting a mass of tiny Diorhabda beetles already crawling up the fabric to escape.

He scribbles the number — “160,” he says — and the GPS coordinates in his notes. That’s a drop from the 200 or 300 per net he’s seen here before. Jamison, a biologist now with the Colorado Plateau Research Station at Northern Arizona University, has long tracked the tamarisk leaf beetle through the Southwest. One trip, he says, these trees dripped with beetles.

Whether that’s a good thing depends on whom you ask. These Old World beetles were imported and released in the early 2000s as a biological control for tamarisk, a once-beloved Eurasian tree that now monopolizes vast stretches of western waterways.

Levi Jamison nets and counts tamarisk beetles in New Mexico. The biologist is tracking the insects as they move through the Southwest and threaten habitats of native species, like the Southwestern willow flycatcher. (Credit: Katherine Mast)

And the beetles are doing their jobs, munching away at tamarisk leaves — their only food — and leaving swaths of brown, defoliated trees in their wake. A single feast doesn’t usually kill the trees; it just weakens them and temporarily halts their summerlong seed production. But repeated attacks year after year have reduced tamarisk cover by up to 50 to 90 percent in some places. Everyone was surprised how quickly the beetles adapted to their new home, and how quickly they spread.

The pretty, wispy tamarisk with its scalelike leaves and delicate white or pink flowers is thought to have arrived in North America as a decorative plant sometime in the early 1800s. Toward the end of that century, federal agencies were celebrating the success of the tree — also called salt cedar — as a riverbank stabilizer that could tolerate drought.

In 1930, it was a cure-all for erosion concerns in the West. Before long, it was vilified as a water-hogging monster. And by the 1950s, federal and state agencies had galvanized to bring the monster down.

But tamarisk isn’t quite the monster it’s been made out to be. Sure, it’s highly flammable, and it may salinate the soil when it drops its salty leaves. But water hog? Turns out, it uses roughly the same amount of water as native riparian trees like willows and cottonwoods.

Since the middle of the 20th century, humans have dramatically altered western rivers and made it harder for native trees to compete. We’ve built dams and diverted water, and we’ve tamed the periodic floods that once spilled over riverbanks to sprout new generations of willows and cottonwoods. As we engineered the rivers, tamarisk increasingly had the upper hand.

In response, some native birds — like the Southwestern willow flycatcher, which loves dense shrubs along desert waterways — turned to tamarisk trees to make their nests.

And for vast swaths of western rivers, tamarisks are now the only tree. They are the third most prevalent riparian tree in the West and can grow as a monoculture. And that decreases biodiversity of other plants, wildlife and even fungi. “What’s problematic is that when it grows aggressively, it dramatically changes the landscape in ways that negatively affect native fauna and flora,” says University of Denver ecologist Anna Sher, who studies tamarisk and riparian restoration.

Creeping in on Flycatchers

Controlling tamarisk is a herculean task. Bulldozing just creates a Hydra, with multiple shoots resprouting from the roots left behind. Tamarisk survives, and even thrives, in fire. Manual removal with chain saws and local herbicide application is prohibitively labor-intensive for landscape-scale control, and aerial herbicide sprays are expensive and kill desired vegetation.

A biological control agent — four species of Diorhabda beetles in this case — offers another tool.

The U.S. Department of Agriculture began searching for a tamarisk biocontrol in the mid-1980s. By 2001, they’d launched the tamarisk beetle program, releasing the insects at 10 different sites with the caveat that no releases would be permitted within 200 miles of a known flycatcher nest.

But by 2008, after an unsanctioned beetle release in southern Utah, Diorhabda carinulata reached the Virgin River: flycatcher habitat. Ecologists worried the beetles would destroy the tamarisks that this unique bird had come to rely on for nesting. And in 2010, the USDA ended the program.

“Since 2010, it’s been impossible to transport them across state lines,” says Dan Bean, an insect physiologist who’s worked on the beetle release program since it began and is now director of Colorado’s Palisade Insectary. “But like all biocontrols, the insect has absolutely no respect for state boundaries.”

The federal government has stopped supporting the beetle program, but the beetles continue to adapt to their North American home. They’ve evolved to have life cycles better suited to lower latitudes, and they’re still expanding into new watersheds. In some places, like central New Mexico, different Diorhabda species overlapped for the first time this summer.

As Jamison peers into his insect net, he’s not worried about getting an exact count. “I don’t care how many beetles are on this tree versus that tree,” he says. “I just want to know if there are none, a few, or a ton of them, and the impact they’re having.” He wants to know if there are enough here to eat all the leaves on the trees, and there are.

The beetles work in big, migrating groups and produce multiple generations in a season. “Right about five o’clock in the afternoon — we call it the rush hour — the beetles climb to the top of the trees and release a sex pheromone that travels on the wind. You get all these beetles following the smell, and they congregate and have a big party and have a ton of sex and lay eggs all over the tree, and then go do it again somewhere else,” Jamison says. A month later, those eggs hatch into larvae, which munch on the leaves. When they pupate into adults, they fly off to find fresh, green tamarisk.

Jamison finishes his sweep of the roadside site, then heads back to his van with a few beetles he’ll keep as samples for genetic analysis. Sitting on the cooler that serves as his workbench, food refrigerator and beetle storage, he fills a glass vial with ethanol to preserve the insects. “Right now, there are two species on the Rio Grande that look identical,” he says. One, Diorhabda elongate, which hails from central Asia, has been moving south from Colorado. The other, Diorhabda sublineata, from Tunisia, has been working its way north. Just south of here, near Bosque del Apache National Wildlife Refuge, he expected to find the two species overlapping for the first time in the New World.

Tamarisk and the tamarisk beetle are now permanent features of our western waterways, says Ben Bloodworth, who coordinates beetle-monitoring programs across the western U.S. and Mexico for the nonprofit Tamarisk Coalition. There was never an expectation that the tree would be eradicated, he says. Rather, the goal is balance — revegetating the riversides with native riparian willows and cottonwoods or, if current hydrology and a changing climate just won’t support those flood-adapted plants, perhaps relying on native grasses and shrubs.

“The name of the game now is restoration,” says Jamison. “Let’s get these ecosystems to where the balance is tipped toward the natives doing really well and non-natives not taking over.”

This article originally appeared in print as "The Beetle, the Bird and the Tamarisk Tree."