The Banana As We Know It Is Dying...Again 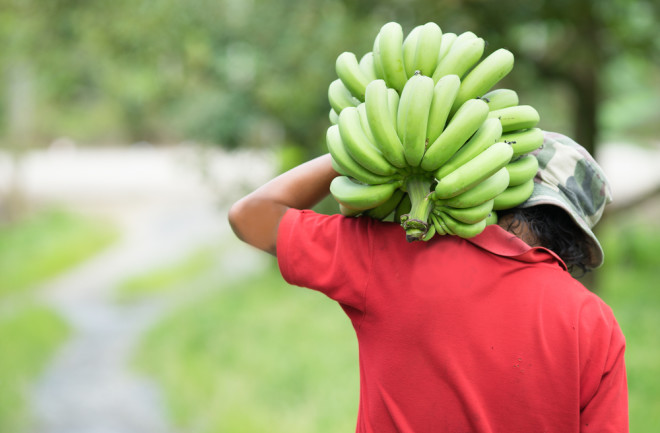 For the moment, we are in the age of the Cavendish, a banana cultivar that accounts for 99 percent of imports to the Western world. But the Cavendish is in trouble. Like its predecessor the Gros Michel, the Cavendish may soon pass from our lives, potentially taking with it an entire industry.

At the heart of the conflict is the sturdy little fungus Fusarium oxysporum f. sp. cubense; it infects and kills banana plants and, since the banana industry relies so heavily on one species, it is spreading steadily across banana-rich Southeast Asia and into Australia and the Middle East.

The awkwardly long scientific name is because it is only one of several strains of the pathogen, also known as Panama disease. The current epidemic is a close cousin to the variety of Panama disease that nearly ended the banana industry entirely in the mid-20th century.

Today, Tropical Race 4, or TR4, is taking down the Cavendish. The mid-20th century menace was Race 1, which ravaged banana plantations in Central America, home to most commercial operations, beginning in the early 1900s. By 1960, it was ubiquitous in the region.

There’s no cure, no spray that fights the disease, and it was only a lucky break, followed by a mad rush of replanting, that saved commercial banana production from itself back then. Today, that same tragicomic situation is playing out once again, and it appears we haven’t learned much.

Those Who Forget The Past

By the early 1900s, United Fruit had established itself as the leading banana producer in Central America. Vast banana plantations, many on land donated by the government, produced vast quantities of a fruit few in the U.S. had ever seen before. The banana would soon be firmly entrenched in consumer’s lives.

But we don’t know bananas, not really. United Fruit made its fortune on a single variety, the Gros Michel, which is just one of dozens of varieties grown for consumption around the world. Western customers, then and today, have only peeled back one layer of the real diversity that’s out there.

Gros Michel, or “Big Mike,” was near-perfect for mass production. Tightly-packed bunches, thick skin and a general durability made it easy to transport and the banana was sweet and creamy enough to keep customers coming back. Once they had the Gros Michel, the banana companies never looked back.

Banana growers utterly embraced Big Mike, growing it as a monoculture on massive plantations to take advantage of the heightened efficiency that homogenous production brings. In the process, they lost the resiliency that diversity imparts.

In a forest filled with hundreds of plants, Cavendish and Gros Michel plants would have been few and far in between, so Panama disease couldn’t spread far. In a plantation where bananas grow by the thousands, the fungus had nothing to stop it.

The fungus lives in the soil, where it attacks the roots of the banana plant and eventually clogs their xylem, the tissues responsible for transporting water. Within a few months, or a year or two at most, banana plants die. Fusarium spreads slowly but surely as it can’t travel via the wind like some other diseases; instead, it hitches rides on boots, tires and farm equipment. Once the disease infiltrates a plantation, containment is difficult — most growers simply choose to abandon the infected soil completely — and the fungus creates spores that can remain viable for decades.

Because the fungus spreads so slowly, United Fruit was for a time able to maintain production by simply moving their plantations. The company exerted enormous political influence in the poor Central American countries it occupied, leaving them free to snap up millions of acres of fresh land.

“The policy was, when our plantations die out we will just move on to other good banana soils, which would be virgin rainforest, chop it down and keep expanding,” says Clyde Stephens, a retired banana researcher who worked for United Fruit for more than 30 years.

Over the course of more than three decades in the 1900s, United Fruit staged a measured retreat through the verdant rainforests of Central America. Tropical forests, with their nutrient-rich soil, were replaced by orderly stands of banana plants in a wave of colonization and subsequent abandonment. All the while, the fungus stalked close behind.

“And finally, they couldn’t keep running,” Stephens says. Desperate for a cure to Panama disease the company poured millions of dollars into a long-shot solution: Flooding banana fields in an attempt to drown out the fungus.

“After a year or two, all the new planted vigorous, beautiful Gros Michel started dying off,” Stephens says. “It was a multi-million-dollar failure.”

In 1958, Stephens says, decades after Panama disease first showed up, United Fruit finally began searching for a new variety in earnest. Though there are many edible banana varieties out there, few also have qualities that make them ideal for mass production.

Through trial and error they found that the Cavendish, a variety similar to the Gros Michel and discovered hiding in the greenhouse of a British Duke, seemed able to the weather the fungus. It was a windfall. Though it didn’t ship as well as the Gros Michel, the Cavendish was easy to grow and tasted good enough for the company to stake its future on.

In just a few short years, Stephens says, United Fruit figured out how to plant, foster, fertilize, harvest, ship, ripen and sell the Cavendish banana. It was a massive feat of agricultural engineering, and saved the company from bankruptcy. By the mid-1960s, United Fruit was wildly profitable once again, and the banana was back.

But just 30 years later, an interregnum short enough that those who fought Panama disease in Central America are still alive to remember it, the fungus resurfaced in southeast Asia, in Cavendish bananas this time. The one-time savior of the banana companies had a short life span.

Doomed To Repeat It

Though United Fruit, now Chiquita Brands International, has lost the dominance it enjoyed during the 20th century, the banana continues to be a lucrative crop. While Latin America still leads the world in exports, Southeast Asia countries produce far more — most of which is consumed at home. Globally, 114 million tons of bananas are produced every year, almost half of which are Cavendish.

Though Southeast Asia, where bananas originated, grows dozens of varieties of banana, the Cavendish is the only kind deemed acceptable for export. That makes it a lucrative cash crop, and the region exported nearly 4 million metric tons of bananas in 2014.

The Cavendish boom began in the 1990s, when demand from Middle Eastern countries began to grow. And, coincidentally, that time period neatly aligns with the first wide-spread appearance of TR4 in the region, says Randy Ploetz, a professor of plant pathology at the University of Florida.

“For the first time we started seeing this susceptibility of what we thought was a resistant banana,” he says. “In short order when they started trying to grow these export plantations of Cavendish in southeast Asia they started succumbing to this new genetic group of the pathogen.”

Ploetz thinks that TR4 was probably there in the soil all along, but, because it doesn’t affect many of banana types typically grown there, it was never able to spread. In fact, the disease likely grew up right alongside the bananas, he thinks, a tandem evolution that left the disease more virulent and the local bananas better at protecting themselves. The Cavendish, though, didn’t benefit from this evolutionary arms race.

“Monoculture plantations of banana or any crop are a surefire way that if you’ve got a virulent pathogen out there, boy you’re gonna know about it because you’ve got this uniform population of suspect hosts,” he says.

The way TR4 is moving is depressingly similar to the way TR1 spread in Central America. And Asian banana growers are reacting much like United Fruit did, by uprooting plantations to try and keep ahead of the disease. It’s already widespread in China, Ploetz says, and has begun to encroach on Laos and Vietnam.

As before, the tactic isn’t working. Banana exports in 2015 from Asia dropped by 46 percent, due to both storms and the disease. In recent years, the disease has spread to Australia and the Middle East, and turned up most recently in Mozambique. Growers in Central America worry that they’re next.

It hasn’t helped that plantation owners in Asia often don’t use responsible planting techniques that could slow down or perhaps stop the disease’s spread. That includes quarantining affected areas and carefully cleaning farm equipment that could transmit the disease elsewhere. The practice of using suckers, or shoots from the banana plants’ stems, to grow new stands could be a factor as well. Commercial bananas are clones, they don’t reproduce with seeds like most plants. When growers need to establish a new grove, they do so with the identical twins of existing plants.

Suckers from infected individuals will spread the disease wherever they are planted. Plants grown from tissue cultures, or collections of cells incubated in a lab, won’t spread disease in this way, but the practice is more difficult and expensive and growers in southeast Asia don’t always do it.

One company in the Philippines, South African-based Unifrutti, has done a decent job of keeping their plantations clean, Ploetz says, but they are by far the minority. Even Australia, where a government-imposed quarantine for bananas went into effect, was unable to keep the disease out.

To cope, researchers have for years been attempting to create genetically modified versions of the Cavendish that are immune to TR4. There has been some success with breeding somoclones, a type of genetic variation caused by tissue culture cultivation. There are a few somoclonal variants that display a greater resistance to Panama disease, Ploetz says, but even these die out after two or three cycles of harvesting and must be replanted.

The prospect of creating a transgenic banana, one with beneficial genes from another species, or one that’s been modified with a technique like CRISPR is even more tantalizing. Just this year, James Dale, a researcher at the Queensland University of Technology in Australia reported that he’d created two strains of TR4-resistant Cavendish using genes borrowed from other species. Two separate varieties, one with genes from a banana resistant to TR-4, and another with genes from a nematode, remained disease-free after three years.

It’s a victory for Dale, who’s been working on such a banana for years now. And it could represent a renaissance for the Cavendish, allowing the banana to return to fungus-laden fields and continue its dominance. Such an undertaking would be expensive, though banana exporters who have built their fortunes on the variety could have little choice. And for Central American growers fearful of the disease’s seemingly inevitable appearance on their shores, it could be a godsend.

If planting transgenic banana proves to be economical, and consumers can stomach the extra genes, the Cavendish may well remain king in Western supermarkets for the foreseeable future.

What remains to be seen is whether genetically-modified bananas are simply a more high-tech version of the great banana swap United Fruit pulled off in the 20th century. No matter what genes they have, the Cavendish will still be grown in the kind of monoculture plantations that let disease spread in the first place.

If Ploetz is right, TR4 could be but one of many previously undiscovered banana pathogens already in existence. TR5 could be lurking in the wings, waiting for its cue.