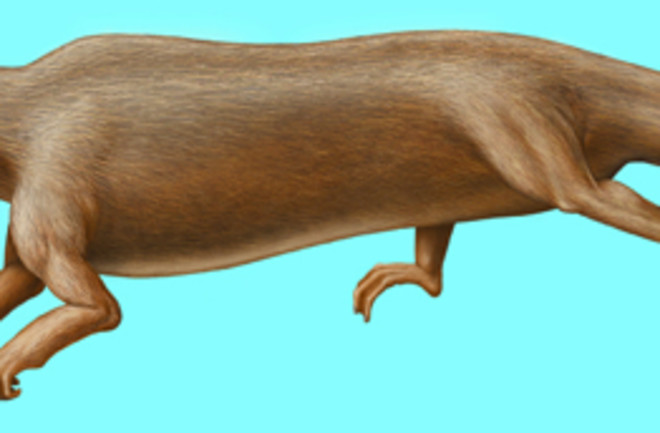 If you take a look at a whale or dolphin--any whale or dolphin anywhere on Earth--it will follow certain rules. It will have a blowhole. It will not have legs. It will have horizontal tail flukes it raises and lowers to swim (as opposed to fish that bend from side to side). And it will have been born tail first (as opposed to the head-first position of land mammals). These sorts of rules set whales and dolphins off from other living animals, but only if you look at life as it is today. If you move back in time--especially back between about 50 million and 40 million years ago--the rules collapse. As I detailed in my book, At the Water's Edge, paleontologists began to document the transition whales made from land to sea in the late 1970s. University of Michigan paleontologist Phil Gingerich found the skull of a mammal that seemed like it belonged to a land mammal but had some hallmarks known only in whales. Over the past three decades, he and other paleontologists have found a menagerie of magnificently weird whales. They start out able to walk on land and then gradually adapted to living in the water. Their noses crept up their heads, becoming blowholes. They swam at first kicking like otters, then more like seals, and then finally like whales do today. Of course, the dozens of early whale species paleontologists have discovered are probably only a fraction of the diversity that actually existed. And so whenever new species turn up, paleontologists can use them to test hypotheses about how whales evolved. Gingerich and his colleagues are publishing the details of one today, called Maiacetus, that shines a particularly amazing light on early whale evolution. That's because they've found fossils of both adult males and female Maiacetus--as well as a baby Maiacetus still in her mother. Gingerich's team found the 47.5-million-year-old fossils in Pakistan in 2000 and 2004. They resemble other whales that Gingerich and other paleontologists have found from that same time, with small legs, powerful tails for swimming, and jaws and teeth adapted for catching fish. Like those other early whales, Maicetus had a distinctive "double-pulley" shaped ankle bone that is only found today in even-toed hoofed mammals. (DNA tests show that whales share a common ancestor with even-toed hoofed mammals, their closest living relatives being hippos.) Gingerich speculated at the time that these early whales were living like seals, spending most of their life in water but still coming back to land to give birth. It was a hypothesis that might be tested should anyone ever find fossil clues to how these early whales gave birth. It turned out Gingerich was the one who found those clues.

As Gingerich and his colleagues were digging up one female, things got confusing. They started to find bones that seemed to belong to Maiacetus, but were much smaller than the rest of the female's skeleton. Eventually they realized they were digging up a mother and her unborn calf. (In this drawing, the baby's skeleton is painted blue.) It was pointing towards the birth canal so that it would be born head first--like land mammals and seals. Being born head first is useful on land, because a baby mammal can start breathing air before it is fully delivered. For an aquatic whale, sticking a tail out first means it will be ready to start swimming once labor is over. Judging from the fossil Maiacetus baby, Gingerich concludes that it would have first seen the light of day on a beach, not deep beneath the waves. In other words, Maiacetus breaks the rules of whales, even as it shows how those rules were made. Update: For more blog reactions, see Laelaps, Greg Laden, and Not Exactly Rocket Science. Update: Clarified DNA studies. Images: Adult reconstruction, John Klausmeyer, University of Michigan Museums of Natural History. Fossil drawing copyright University of Michigan Museum of Paleontology. Reference: New Protocetid Whale from the Middle Eocene of Pakistan: Birth on Land, Precocial Development, and Sexual Dimorphism, PLoS ONE 4(2): e4366. doi:10.1371/journal.pone.0004366