A museum’s forgotten cache of preserved creatures shines a light on an ancient, possibly unethical, practice. 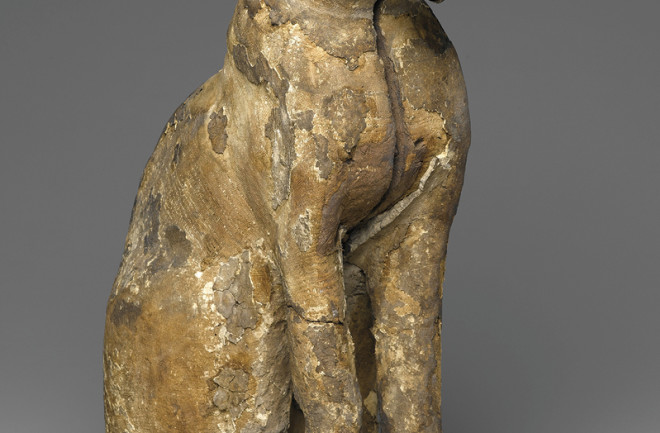 A cat coffin with a mummy inside from 664-332 B.C. | Sarah Desantis/Brooklyn Museum

When tourists visited Egypt in the late 19th century, they often came home carrying animal mummies. The ancient creatures were considered excellent souvenirs, compactly embodying the exotic rituals of an ancient society. The mummies were also abundant. One cemetery in Saqqara contained 7 million embalmed dogs. Another held 4 million mummified ibises. Some of the souvenirs were subsequently unwrapped to see what was inside. Others were bequeathed to museums, where they were politely received and shuffled into basements.

That’s where a curatorial assistant at the Brooklyn Museum found 30 uncataloged animal mummies in 2009, neatly shelved in a storage vault. Times had changed since they were set aside in the 1930s and ’40s. “Early on, museums were specifically interested in displaying luxurious objects,” says associate curator Yekaterina Barbash. “Now more and more curators are interested in displaying the real life of ancient Egyptians.”

The Brooklyn mummies were neither rare nor glamorous. On the contrary, as the most commonplace artifacts of ancient Egypt, they clearly relate to everyday cultural practices. And yet they’re also very peculiar, only slightly better understood today than they were by 19th-century tourists. Textual evidence shows that Egyptians perceived animals in ways that were baffling even to their contemporaries. Associating dogs and ibises with deities, Egyptians elicited scorn from neighboring Jewish and Roman authorities.

Unraveling the meaning of the mummies therefore has the potential to reveal some of the deepest mysteries of a mysterious people. The Brooklyn Museum’s animal mummies — which are on view through January 21 — have become key figures in a multiyear investigation involving Egyptologists, conservators and even a veterinary radiologist.

Messengers to the Gods

Egypt’s animal cults date back to the beginning of its civilization. “We find evidence in the very oldest archaeological sites,” says Barbash.

Initially, the cults tended to focus on specific individual animals with sacred markings, seen as incarnations of gods. The most celebrated of these, venerated as early as 3000 B.C., was the Apis bull, embodiment of god Ptah. Coddled during life, the creature was mummified and buried with great ceremony after it died a natural death. After the burial, priests sought another bull with identical patterning.

The perfect souvenir. This cat mummy from the first century would have fit right in with typical knickknacks bought by 19th-century tourists. | Brooklyn Museum

Animals also played an important role in Egyptian iconography. Gods were frequently portrayed as animal-human hybrids. For instance, the god of writing, Thoth, was sometimes shown with the body of a man and head of an ibis. The origin of this practice remains as elusive as the rise of those animal cults. But Barbash suspects it may relate to the relative ease of life in the lush Nile Valley, where people had the time to observe animal behavior and associate divine attributes with the traits of bulls and ibises.

Yet all these activities seem humdrum compared with what happened during the Third Intermediate Period, from approximately 1075 to 656 B.C. With startling suddenness, mummification went mainstream. Tens of millions of embalmed animals were deposited in at least 31 cemeteries throughout Egypt. One cat repository, found by farmers in 1888, was reported to have “a stratum thicker than most coal seams, 10 to 20 cats deep.”

Struggling to explain the phenomenon, some scholars have described the mummies as votive offerings, akin to candles in Catholic churches. At the Brooklyn Museum, a more beguiling explanation is emerging.

“The Egyptians believed that animals had souls,” asserts Edward Bleiberg, the museum’s head curator of Egyptology. Like the soul of a human, the animal’s soul (or ba) was capable of posthumous travel and communication. And the relationship of the animal to a particular deity allowed its soul to address the god directly — as long as its body was properly mummified. Bleiberg gleaned this information from ancient texts.

A cat coffin with a mummy inside from 664-332 B.C. | Sarah Desantis/Brooklyn Museum

Perhaps more interesting is what he found in letters buried with a few of the mummies. Their writers implored the gods to help them with personal troubles and disputes at work, offering donations to their respective temples in exchange. “It was very transactional,” he says, noting that this divine deal-making may have become particularly important in the Third Intermediate Period, as the power of the central government disintegrated. “People were looking for other ways of solving their problems,” he says. “The mummies were dispatched as messengers to the gods.” And in the vast majority of cases where letters are not found? Bleiberg surmises that the messages were delivered orally.

Given the complexities of mummification, and the proximity of animal catacombs to temples, the practice was clearly administered by the priesthood, which seems to have treated it as a business. Preparations range from simple linen wrappings to fancy coffins shaped to evoke the animal inside: a divine messenger for every price point. But observation of the artifacts and textual evidence can reveal only so much. Egyptologists still want to understand how priests supplied such heavy demand — and whether they resorted to fraud.

On June 17, 2011, the animal mummies in the Brooklyn Museum took a trip across the Brooklyn Bridge to The Animal Medical Center in New York. Over the course of seven hours, animal radiologist Anthony Fischetti subjected them to high doses of radiation in the hospital’s CT scanner. “It was very different from my usual work,” he says. “It didn’t require any sedation.”

At the request of Bleiberg and Barbash, Fischetti identified the creatures inside — ibises and cats and shrews and snakes — and also noted details such as their age and physical condition. He found that many were young and had fractured necks or trauma administered by blunt instruments. These results lend weight to the researchers’ conjecture that priests resorted to industrial-scale farming and slaughter to harvest the legions of future mummies.

A Horus falcon-form coffin from 664-30 B.C. made of bronze and gold. | Gavin Ashworth/Brooklyn Museum

Some scans also showed incomplete mummies or even empty wrappings, supporting ancient accusations, preserved in the Egyptian equivalent of court documents, that the priests were cheating their customers — perhaps because they couldn’t keep up with people’s divine communications needs.

However, other scans suggested there may be more to the story: Partial animals are often found in elaborate packages paid for by wealthy patrons who could probably afford a whole cadaver (especially since there are plenty of cheaper examples containing compete bodies). And follow-up scans using the American Museum of Natural History’s more powerful CT machine have shown that some wrappings enclose as many as 20 tightly-packed shrews — hardly a way for priests to economize.

These permutations on the mummy formula may reveal nuances in religious practice or regional differences in rituals. They might even end up elucidating how consistent beliefs were across space and time. “I think right now we’re working at a very high level of generalization,” says Bleiberg. The millions of preserved animal mummies in collections worldwide provide a uniquely large sample size for further study. “We’re talking about really big data here, especially for Egyptology, where we are quite often content to generalize from a very few cases,” he says. “Here we have a real opportunity to generalize from a very large number of cases.”

The mummified messengers from ancient Egypt are plentiful and ready to communicate with us. We just need to unpack their carefully preserved messages.