Climate change, fires and deforestation create a perfect storm that will destroy the Amazon in about 40 years. 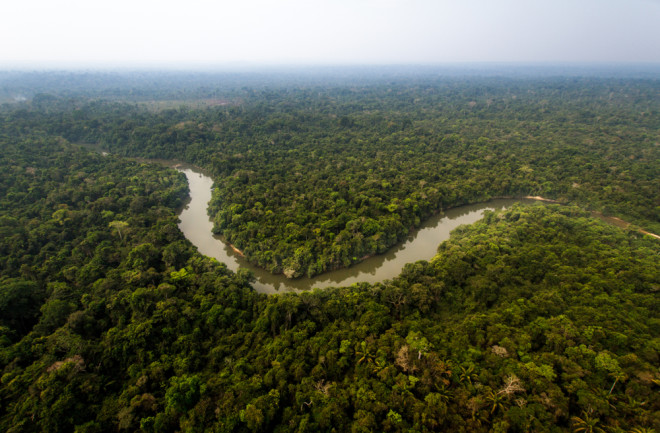 The Curuaés River passing through Menkragnoti Indigenous Land in the Amazon Rainforest in the Brazilian state of Pará. (Credit: marcio isensee/Shutterstock)

Deforestation in the Amazon has long been the poster child of man-made environmental destruction. But recent trends reveal that the changing climate will likely come for this beloved rainforest long before the last tree is cut down. One researcher has even put a date on his prediction for the Amazon’s impending death: 2064. That’s the year the Amazon rainforest will be completely wiped out.

Dramatic? Yes. “I’m a doom-sayer,” admits Robert Walker, a quantitative geographer at the University of Florida’s Center for Latin American Studies, who came up with the 2064 prediction. “I don’t want to be Chicken Little, telling you that the sky is falling, but the numbers speak for themselves,” he says.

Walker has been studying the Amazon for decades. To come up with this new prediction, he compiled figures from recent studies that have quantified aspects of the changing forest like drought frequency, fire frequency, deforestation and rainfall patterns. When you look at the trajectories, he found, there’s a concrete point when the rainforest will no longer be able to recover in-between increasingly frequent and widespread perturbations. When that happens — around 2064, Walker predicts — there will be no more rainforest; in its place will be a scrubby, grassy savanna.

The situation in the Amazon may have actually been looking up at the turn of the century, albeit briefly. Deforestation rates dramatically declined between 2004 and 2012. But since then, they’ve been back on the rise, and in 2020, deforestation in the Brazilian Amazon was up to its highest rate of the decade.

In 2018, scientists projected that the rainforest would be able to handle losing 20-25 percent of its forest area before it would collapse into a drier ecosystem. This is because losing trees actually changes the weather patterns — due to the way trees give and take moisture from the air — so a certain amount of deforestation will likely cause enough atmospheric change to collapse the rainfall system.

Then in 2020, researchers updated their estimates of how much forest had actually already been lost, finding 11 percent of the Amazon had been deforested, and another 17 percent had been significantly disturbed. How does that fit into the 20-25 percent threshold? It’s tricky; disturbance isn’t the same as deforestation. Cutting down forest to make way for a pasture or agriculture field is true deforestation. A degraded forest, on the other hand, might be burned, have roads cut through it, be selectively logged or be degraded by other disturbances — yet still remain a forest. At least, it is at first.

These sorts of forest disturbances can trigger a feedback loop where disturbance leads to even more disturbance. Let’s say a fire sweeps through a forested area, for example. Some trees and plants will survive while others die. In a healthy forest, this burned area would recover back to what it once was within a few years. But in a disturbed forest, it’s more likely that invasive grasses (which have been widely planted for pastures in the surrounding area) come in to fill the gaps the dead trees left instead. These invasive grasses out-compete the native forest tree seedlings, preventing the forest from regenerating. They’re also flammable, increasing the likelihood of more fires — meaning the cycle repeats with increasing frequency.

What’s more, deforestation leads to an increase in man-made disturbances, since it brings people — and the roads they build — deeper into the forest.  “Deforestation is really what brings the fires … [and] we know fire moves down these roads,” says Walker. “All of those circumstances come together to give you the transition of the forest.”

Climate change adds another important layer to this story. Recent work from physical geographer Nafiseh Haghtalab and colleagues at Michigan State University found that some parts of the western Amazon Basin have been getting more rain than usual: over 7 additional inches of rainfall per year since 1982.

But to the east and south — where deforestation is rampant — it’s getting drier. There, the dry season, an annual period of about seven months with little rainfall, has been increasing by about one day per year. This sort of phenomenon where wetter places get wetter and drier places get drier is one of the core predictions of how climate change will play out across the world’s landscape. This study shows that it’s already happening in the Amazon, and has been for decades. These drier conditions increase the likelihood of fire, further aggravating the already-aggravated systems.

When a severe drought hits, many trees drop their leaves and some even die — patterns which are easily documented by visual means, such as satellite imagery, across large landscapes. Researchers studying a particularly bad drought in 2005 found that the rainforest can recover, but it takes over 4 years to recover all of the canopy cover an area had prior to the drought.

“Given that we know the 2005 drought was 20-30 days longer than the average dry season,” explains Walker, “We can calculate how long it will take to arrive at a point where that particular drought becomes the new normal.” Once the drought-return cycle hits 4 years or less — the time it takes the forest to recover — the next disturbance will be the last. The forest will no longer be a forest. The trees that die won’t be replaced, the invasive grasses will move in, and fires will maintain the new savanna system.

Walker’s confident in his prediction. “This is going to happen unless we do something radical to change whatever it is we’re doing,” he says. Not only would it take reducing greenhouse gas emissions and deforestation, but ultimately decreasing the likelihood that the forest will catch fire.