The 4 Ways Raptors Use Their Talons to Smite Prey 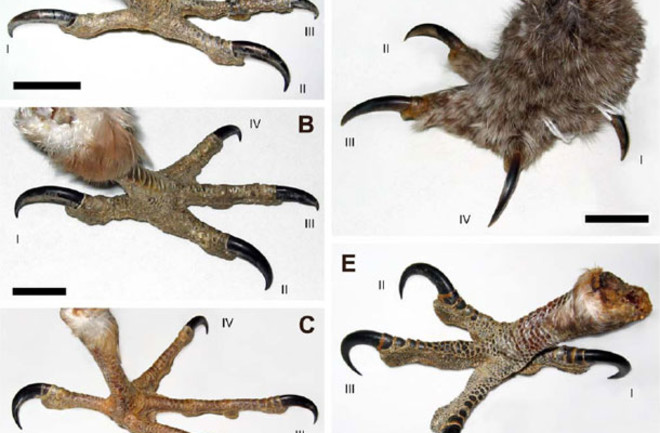 You'd think something with as much awesome power as the talons on birds of prey would be among the better-understood appendages in the animal kingdom. Not so, say the authors of a new in PLoS One, but they've rectified the situation by analyzing 24 different birds to reveal the evolution and use of talons by the owl, osprey, falcon, and more.

They describe how accipitrids, which include hawks and eagles, have two giant talons on their first and second toes [as in pictures A and B]. These give them a secure grip on struggling game that they like to eat alive, “so long as it does not protest too vigorously. In this prolonged and bloody scenario, prey eventually succumb to massive blood loss or organ failure, incurred during dismemberment” [Wired.com]

. Owls crush prey between two opposable talons [image D], then swallow their prey whole. Osprey, on the other hand, bear fishhook-talons [E]—fitting, as they catch fish just below the water's surface. Falcons rely less on their talons [C], preferring instead to break their prey's neck with a bite. And this research tells scientists more than just how today's killer birds bring the pain. The findings could help researchers understand the birds’ dinosaur ancestors. The researchers are now studying how dinosaur claws reflected their hunting and feeding habits [Wired.com]. Related Content: 80beats: In Galapagos Finches, Biologists Catch Evolution in the Act DISCOVER: Raptor Repeat: Did Dinos Evolve Flight Twice? DISCOVER: Even Eagles Get Cataracts