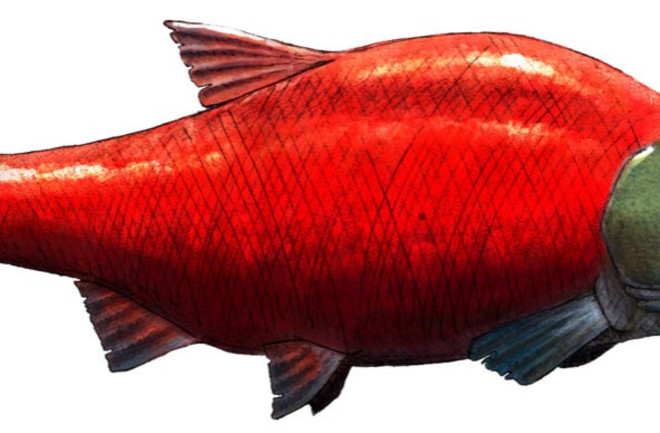 A spiky-toothed giant salmon once plied the ancient rivers and coast of California. Credit: Jacob Biewer/Society for Vertebrate Paleontology. Giant salmon up to nine feet long left their homes in the Pacific to spawn in California's ancient rivers more than 5 million years ago. But if you think the big deal about these Miocene monsters was their size then guess again: it's a fish story you can really sink your teeth into. According to research presented at this week's annual meeting of the Society for Vertebrate Paleontology in Salt Lake City, giant salmon lived along the Californian coast 5 to 11 million years ago, heading up ancient rivers to spawn, much like today's Pacific salmon. But the average modern wild Pacific salmon weighs 4-20 pounds at maturity, according at least to the people who catch them for a living. The giant monster salmon of the Late Miocene checked in at up to a whopping 400 pounds. And yes, I suppose I could have researched the weights of different species of wild Pacific salmon more thoroughly but hey, you get the idea — and what I really want to talk about are the Miocene Monster's teeth. Because they were big.

Regular Dead Things readers know how much I love illustrations that go the extra mile to sell the science. I can't decide what's my favorite element of this Late Miocene river scene, the bear looking rather pleased about landing a salmon almost its own size, the sweet little turtle just out for a swim or the rather suspicious-looking raccoon who is clearly planning a crime. Credit: Jacob Biewer/Society for Vertebrate Paleontology.

So Much Sashimi — If You Dare

If you're familiar with what today's salmon look like before they end up in a supermarket freezer, you may be surprised to hear the filter-feeder of yore had some serious spike-like teeth, more than an inch long in some specimens — the teeth of the extinct giant salmon are significantly larger than today's species, even when taking into account it was a much bigger fish to begin with. Why the fangs of fury? Well, the modern male salmon gets pretty protective about eggs it has fertilized, often fighting with other males muscling in on its turf and potential progeny. It's reasonable to assume the giant extinct salmon had similar behavior. Modern salmon also undergo physical changes as they prepare to head upriver for Sweet Salmon Sexytime. Researchers looking at several dozen fossils of the giant salmon from both saltwater and freshwater environments found that the freshwater fish had significantly larger teeth than their briny bros, and that the teeth were also more curved. In other words, them's fightin' teeth. Much like modern salmon, the giant Miocene Monster appears to have undergone physical changes pre-migration that gave it an advantage over competition, whether the teeth were used for actual fighting or just display to make a potential rival think "ah, no thanks, never mind." Sadly, determining how delicious the giant salmon might have been was far outside the scope of the research. But one can imagine.