That Hidden ‘Superhenge’ Was a Super Dud 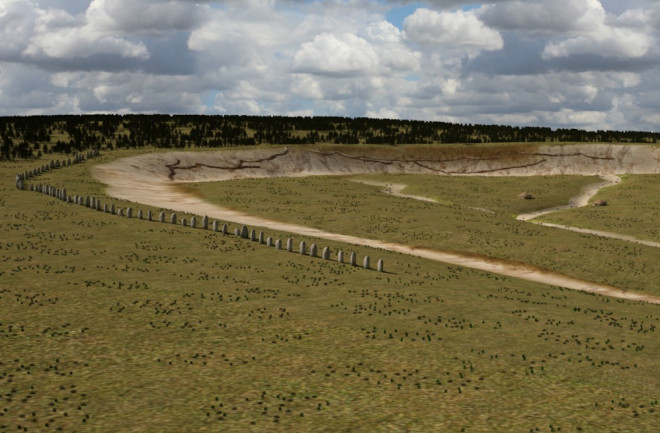 An artist's conception of the "Superhenge" that never was. (Credit: LBI ArchPro, Juan Torrejón Valdelomar, Joachim Brandtner) Last year, researchers announced that a “Superhenge” buried underground a couple miles from Stonehenge was poised to upstage the iconic monument. Archaeologists with the Stonehenge Hidden Landscapes Project hitched ground-penetrating radar devices to trailers towed by four-wheelers and tractors. Using these advanced instruments, they constructed a 3-D picture of what was buried beneath. Based on the images, the team believed it had discovered a row of roughly 90 standing stones, some that were originally 15 feet tall, buried near Durrington Walls just two miles from Stonehenge. This year, when shovels hit dirt — ground-truthing as archaeologists say — they didn't find a Superhenge. There was no evidence of large buried stones — sorry druids. Still, the dig added yet another perplexing twist to the history of one of mankind's most intriguing monuments. What They Found So what did archaeologists find? It turns out the structures picked up on radar were actually large pits that contained wooden posts long ago. Here’s what National Trust archaeologist Nicola Snashall told BBC News:

"What we've discovered are that there are two enormous pits for timber posts. They have got ramps at the sides to lower posts into. They did contain timbers, which have been vertically lifted out and removed at some stage. The top was then filled in with chalk rubble and then the giant henge bank was raised over the top."

Snashall says builders of Stonehenge constructed the beginnings of a large timber circle around Durrington Walls once the settlement in the area went out of use. The dig wasn’t a complete “dud” by any means, as it built a more accurate picture of what was, or wasn't, at the site long ago. And it's a safe bet that Stonehenge hasn't revealed all its secrets. Over the past few years, researchers have identified several new structures in the countryside around Stonehenge. They've also learned that those iconic stones might have been hand-me-downs, and that Stonehenge builders loved to barbecue.