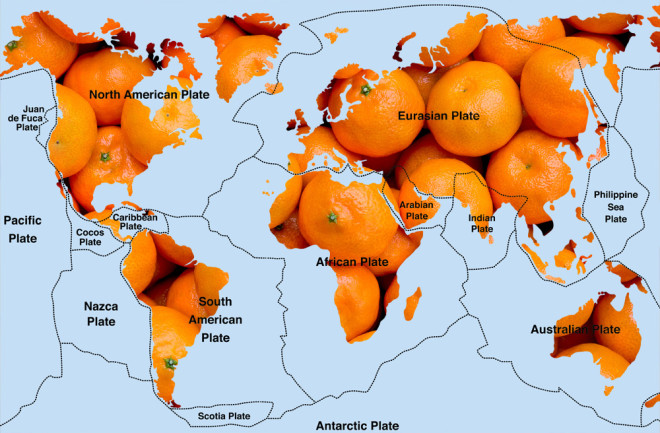 (Credit: Shutterstock) If you’re an orange juice lover, you should be thankful for the rather bizarre behavior of the Indian tectonic plate. A new and sweeping genetic study, published Wednesday in Nature, has pinpointed the origins and evolution of citrus. The study shows how the fruit emerged at a time of geological upheaval more than 8 million years ago in Southern Asia and spread thanks to genetic mutations that produced more palatable fruit for animals — as well as our human ancestors. Within this new genetic study, scientists now have a catalog of genes for more than 60 kinds of citrus. This database could serve as a tool for researchers trying to create new crops resistant to a disease called citrus greening, which has decimated groves in the U.S., China and Brazil. No citrus tree is immune. But scientists are still trying to understand the genetics that leave some citrus varieties more tolerant of greening than others. Comparing Oranges to Oranges The story of citrus starts some tens of millions of years ago, when India’s tectonic plate made a relatively rapid push north until it collided with Asia. As the Indian Plate and Eurasian Plate collided, the entire region rose up, forming the Himalayas. This uplift also created a new climate — alternating between wet and dry — across an area encompassing parts of northeast India, Myanmar and southern China. Plants and animals were forced to adapt to this geologically sudden change. And an ancient orange ancestor was perfectly placed to take advantage. It was hardy, had a tough rind and little vesicles inside to store water. References to citrus appear in some of humanity’s oldest texts; they’re depicted in Roman mosaics and other ancient art forms— even in the Bible. Yet citrus’ origin story remains controversial. For a century, some have claimed the fruit started in India. Others claimed it came from China. More recently, scientists even claimed the fruit started in Australia. Scientists even debate whether the species should be classified as citrus. “A lot of this was based on conjecture, preconceived notions and sometimes culturally-biased opinions,” says University of Florida citrus breeder and geneticist Fred Gmitter, who was part of the international team behind the Nature study. “We finally had the opportunity to lay to rest speculations.” Sweetness The team started with an 8-million-year-old citrus fossil found in China’s Yunnan Province. The now-extinct species served as a jumping off point to show how the branches of the evolutionary tree — each one holding a different and distinct fruit — diverged. Pummelo is one of those important fruits. By studying its genes, scientists learned that a mutation made it split off from a sourer relative millions of years ago and start producing sweeter, larger fruit. That encouraged birds and animals, and eventually humans, to eat the delicious fruit and carry its seeds with them, making pummelos proliferate. This also leads us to the sweet orange. The Nature study shows that sweet orange originated no more than 10,000 years ago — perhaps even much more recently. Scientists think the orange emerged in Asia as a natural hybrid of pumelo and another ancient citrus species, the mandarin. At first, monkeys and other animals likely carried it around, but eventually humans became the driving force in citrus evolution. “If you think about what would motivate people to want to have citrus fruit near their caves or huts or whatever they’re living in, it’s bigger sweeter fruit,” Gmitter says. And it and other now-common cultivars like lemons, also benefited from another mutation. Many species are zygotic — they produce seeds that spawn unique individual trees. But this new fruit’s seeds produced clones of itself. “If a mother and father get together and have 100 kids, every one is going to be different,” Gmitter explains. “If you plant a sweet orange and have 100 kids, every one is going to be the same kid.” And each kid will be identical to the mother. The Grapefruit Pirate All of this evolution happened before citrus left Asia, but there is one fruit that emerged uniquely in the Americas: The grapefruit. Citrus was commonly carried along the Silk Road in ancient times. And Europeans eventually took to carrying it with them around the world and planting citrus trees in new colonies. But one of these pummelo plantings on the island of Barbados actually hybridized with a sweet orange, creating an offspring with white flesh and a bitter, unique flavor. It was the grapefruit. A man named Count Odet Phillipe was a huge fan of this mutant. And in the 1800s, as an early European settler, he brought it with him to what’s now called Safety Harbor, near Tampa Bay, Florida. We don’t know much about this rather Bohemian, rhapsodic character who claimed he was not only a count, but also a pirate, a surgeon and the nephew of France’s King Louis XVI. None of those things were probably true. But he was apparently generous with his fruit, offering the seeds freely to others until growers raised it from Florida to Texas, and eventually California. Over the years the grapefruit changed again, taking on pink and then red colors as well as a blushed rind, thanks again to a bit of help from genetic mutation. Gmitter says now that the collaboration has filled in the broad brushstrokes of citrus evolution, they’d like to go back and study some of the more unusual wild species — like citrus varieties that somehow naturally made their way into Japan. And while the value to science doesn’t always express itself immediately, Gmitter thinks understanding citrus’ path could eventually have more practical impacts. “There’s not a cure for citrus greening in this information, but we have a catalog of their genes now in more than 60 kinds of citrus,” he says. “This informs the process of perhaps trying to lead to a solution.” Editor's note: This story has been corrected from an earlier version. Grapefruit was created through hybridization, not a genetic mutation.