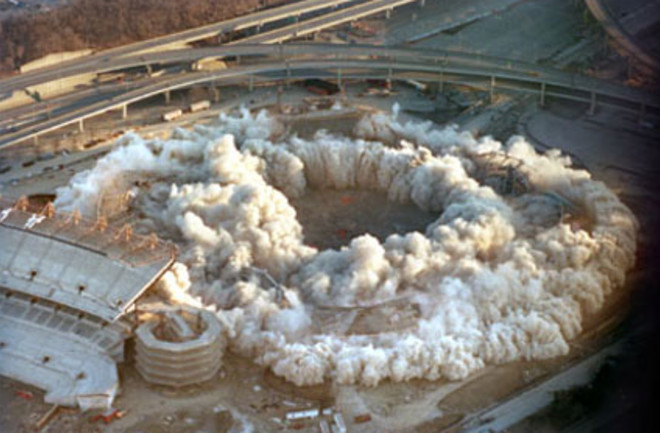 Thousands of onlookers gathered on Sunday to watch and film the planned implosion of the Texas Stadium in Dallas. The 65,000-seat-stadium was home to the Dallas Cowboys for 38 years and was witness to some thrilling football moments--but all good things must come to an end. The stadium was demolished because the team moved to the new billion-dollar, state-of-the-art Cowboys Stadium last season. An 11-year-old named Casey Rogers, the winner of a local essay-writing contest, pushed the button that triggered the implosion, and thus set off 1.5 tons of explosives that brought down the stadium in a systematic manner. In the end, just three pillars stood leaning, leading Herbert Gears, mayor of the Dallas suburb of Irving where the stadium was located, to joke to AFP: "Now we've got Stonehenge." Not only were curious onlookers on hand to observe the implosion, but so were a group of seismologists. In a project nicknamed "Demolicious," a team led by Jay Pulliam of Baylor University in Waco, Texas used seismometers around the stadium to try and get a clearer picture of the region's geological features. Nature News reports:

Pulliam and his team hope that seismic waves from the planned explosion can help to image Earth's crust in the region, an area of interest to seismologists because it is where the Ouachita deformation was created when a supercontinent of Africa and South America crashed into North America about 300 million years ago. The team also hopes to improve understanding of why small earthquakes occurred in the region in 2008–09 after waste water was pumped deep underground in the process of extracting natural gas from shale.

Earlier last month, Pulliam and his team set up their instruments--a seismometer, an accelerometer, and a clock linked to a GPS--near the stadium. The instruments were set up to record the exact timing of the implosion and the rate at which the seismic waves traveled through the ground. However, Pulliam wasn't quite sure what to expect from the implosion's seismic waves. Speaking to Nature News before the big event, he called the process a "terrific experiment." Meanwhile, here's a video of the implosion: Related Content: Discoblog: Chile Quake Shifted Earth’s Axis, Shortened the Length of a Day 80beats: Why Chile’s Massive Earthquake Could Have Been Much Worse 80beats: NASA Jet Studies Haiti’s Fault Lines For Signs of Further Trouble 80beats: Where in the World Will the Next Big Earthquake Strike? 80beats: Haiti Earthquake May Have Released 250 Years of Seismic Stress 80beats: Science Via Twitter: Post-Earthquake Tweets Can Provide Seismic DataImage: Dallas Morning Observer