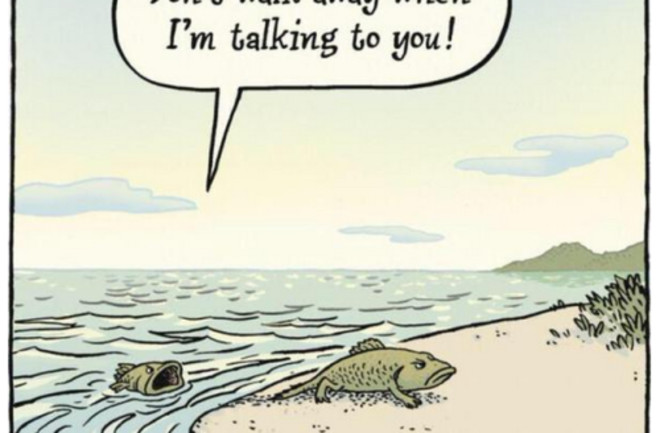 Credit: Dan Piraro. Let's talk about Romer's Gap, not to be confused with the Gap of Rohan (though I would love to talk about that, too, as I am always up for a bit of Tolkien). Romer's Gap is an intriguing question mark in the fossil record that today loses a little of its mystery. On the far side of the gap, about 360 million years ago, we've got aquatic tetrapods — vertebrates with four limbs — which were at that point still pretty fishy (note: not actual scientific term). On the near side of the gap, beginning around 335 million years ago, tetrapods are already a diverse bunch of animals living quite happily on land, walking on legs and breathing air just fine, thank you very much. Romer's Gap is that period in between, when the tetrapod fossil record largely goes dark, leaving paleontologists to scratch their heads over the surf-to-turf transition. “This is a time when tetrapods really got going and started walking about, and yet we had no evidence, or very little evidence, about what was going on then,” says paleontologist Jennifer Clack, professor emeritus at Cambridge University and the lead author on an exciting new study, the first to find sedimentary hints of the tetrapods living it up on land. Published today, the research describes five new tetrapods from that mysterious gap in the record, and they matter. Because you, me, your pet dog, your pet iguana, your pet cockatoo, your fantasy pet Deinonychus that you keep asking Santa for (surely I'm not the only one...): All of us descended from tetrapods. Their fishy-to-leggy story is ours.

The Scottish tetrapod "Ribbo," described in 2012 and found near the most recent batch of Romer's Gap fossils. Credit: Karen Carr.

Over the years, some researchers have suggested that Romer's Gap (first identified more than a half century ago by, yes, a guy named Romer...the late Harvard paleontologist Alfred Romer, to be precise) was the result of lousy conditions for would-be terrestrial species. The thinking went that levels of atmospheric oxygen back in the Late Devonian, when the gap begins, were not high enough to encourage any fishy four-limbs to spend much time out of water. Clack and other researchers argue that theory is all wet: depressed atmospheric oxygen levels would have meant even lower oceanic oxygen levels and tough living for any oxyphiles. Let's not forget the Hangenberg Event, either (who could, really?). The last of a number of mass extinctions sprinkled like Death Glitter throughout the Devonian, the Hangenberg hit around 359 million years ago and is linked to a significant drop in oceanic oxygen levels, though the cause remains under investigation.

Credit: Gary Larson In fact, as with most holes in the fossil record, Romer's Gap looks increasingly like a case of not looking in the right place for fossils, rather a genuine absence of them in the record. Clack sees the gap, in fact, as a kind of vicious cycle. "The rocks we were looking at had no commercial value, so they had not been exploited in the past by miners," she says. "That created bias. They were non-productive sequences. Nothing was found in them, so no one looked for anything in them." Fortunately, that's changing. In recent years researchers have unearthed the odd Gap-years tetrapod fossil here and there. While an area in West Virginia holds promise for future digs, the hot spots for finding the four-limbed vertebrates so far have been Nova Scotia and, in particular, a stretch of southern Scotland where Clack's team and other researchers are focusing their efforts. It's that region — the Scottish Borders — that has yielded the latest batch of tetrapods, from the Tournaisian stage of the Carboniferous Period. The Tournaisian, roughly 345 million-360 million years ago, spans the heart of Romer's Gap. The five new species described today (plus fragmentary finds from at least seven others) show that by this time, tetrapods were diversifying: None of the species described in the latest research are closely related. All of them were small, however; the skulls were 3 inches or less in length. And it's mostly partial skulls that the researchers worked off of, though other, fragmentary bones were found for three of the species, some of them revealed only by micro-CT scans of the rock samples.

It seems ironic that Romer's Gap would get filled in, at least a bit, by Willie's Hole, but that's the name of the site where two of the new species, as well as previous fossils, were discovered. It was no easy task bringing Perittodus absconditus and Koilops herma to light, however. The site is in the middle of a river romantically known as Whiteadder Water, which had to be diverted during the dig. The other new species, Diploradus austiumensis, Ossirarus kierani and Aytonerpeton microps, all came from sea cliffs and shore a few miles to the east, near the village of Burnmouth. Analysis of the rock layers in which the fossils were found suggested the tetrapods occupied different micro-environments within a floodplain. What's particularly intriguing is that all the specimens from around Burnmouth were found in paleosols, a type of deposit indicating a land surface. It's the first time tetrapods this early in the record have been associated with paleosols. It's not conclusive, cautions Clack, but these preliminary findings point to the animals living on land. This could turn out to be the start of zipping up Romer's Gap for good, and even more significantly, documenting our distant ancestors' transition from aquatic to terrestrial living.

On the left, the late Stan Wood, a giant among self-taught paleontologists, points to where he found a number of tetrapods at the Willlie's Hole site (photo from 2010, image credit: Jennifer A. Clack). On the right, lead author of today's study, Jennifer Clack (r), and co-authors Stig Walsh (l) and David Millward (c), at the site during the 2015 excavations, when the Whiteadder River was diverted for slightly less of a mess (credit: Robert N. G. Clack).

Tetrapoda isn't just a bunch of extinct animals — it's nothing less than a superclass (note: that is an actual scientific term), encompassing all living and extinct four-limbed vertebrates. In the Tournaisian tetrapods we already see the beginnings of one of the most significant splits in the animal kingdom. While the researchers caution that additional study is needed, it appears that two of the newly described species may be early amphibians. The other three species are more distantly related, which hints that amphibians were already splitting from the amniotes (which today include mammals, birds and reptiles) on the massive tetrapod family tree. Oh, and another thing: The study included analysis of fossilized charcoal which provides further evidence that atmospheric oxygen levels didn't tumble in the Tournaisian, as some researchers had previously suggested. Another nail in the coffin of Romer's Gap. Today's study, published in Nature Ecology & Evolution, is one of the biggest pieces of the Romer's Gap puzzle yet found. If you're intrigued by the mystery and want more, including some nifty videos of excavations at Willie's Hole and a life on Earth primer, trot on over to a great article by National Museums Scotland. Along with bagpipes, kilts and Rory McCann, it's one more thing to thank Scotland for.