Financial trading is really risky business for individuals and economies alike. Millions of pounds and dollars rest on the fast decisions of stressed people, working under extreme pressure. With such high stakes, it's worth remembering that traders, regardless of their intellect or experience, are as fallible as the rest of us and their brains and bodies are influenced by the same ensemble of hormones. 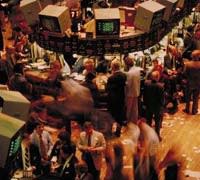 Testosterone is one of these, and it's of particular importance to traders for it can influence a person's confidence and attitudes to risk during competitive encounters. While it seems almost clichéd to talk of the testosterone-fuelled alpha-male, a new study shows that traders that enter the floor with higher levels of this hormone do tend to make significantly higher profits over the course of the day. The actions of testosterone and other hormones could have large effects on entire markets by affecting the decisions of people in the financial sector.

John Coates and Joe Herbert from the University of Cambridge shadowed 17 male traders over 8 working days as they went about their business in a mid-sized City of London trading floor (the City is the capital's financial district for the non-Brits among us). The bulk of their work took place between 11 am and 4pm, and at these times, Coates and Herbert took saliva samples to measure how their hormone levels shifted in a real-life situation. At the end of each one, the duo recorded how much profit and loss each trader had made.

Between saliva samples, the traders would sit in front of a bank of monitors, processing a wealth of financial information, live news-feeds, commentaries and risk-management advice. Their decisions affect the outcomes of trades worth anywhere from £100,000 to half a billion pounds. They were well compensated for their high-stakes job and took home net annual incomes ranging from £12k to a cool £5million, even though the oldest of them was just 38 years old and the youngest, a mere 18!

Coates and Herbert found that the traders were significantly more charged with testosterone on days when they beat their previous monthly average, than on those when they came under it. One trader, for example, enjoyed a 6-day winning streak that saw his profits soar to twice their historic average and his daily testosterone levels rise by 76%. And on days when the traders' morning levels of testosterone were higher than normal, they made higher profits than days when they started off with low levels.

These patterns suggested that high testosterone levels lead to high profits. To rule out other explanations, the duo used daily questionnaires to establish that none of the traders had received any important personal news or had eaten anything that might significantly interfere with their release of hormones. And they excluded the effects of overarching movements in the markets by showing that different traders experienced bursts of testosterone on different days.

The effects of testosterone on trading success makes sense in the light of other studies. The hormone triggers a number of behaviours that you would expect to improve a trader's performance including an appetite for risk, persistence, and boldness in the face of new challenges. Successes can themselves boost testosterone levels, creating a cycle of even further triumphs. This 'winner effect' is also seen in competitive male athletes, whose testosterone levels tend to rise before a big event and rise even further after a win.

Coates and Herbert also measured the traders' levels of cortisol, a 'stress hormone' that alters both body and behaviour in response to stressful or threatening conditions. They predicted that the traders' cortisol levels would shoot up on days when they made particularly large losses, but that wasn't the case.

Instead, the hormone seemed to respond to risk. The traders developed higher levels of cortisol by the end of days where their profits showed the largest variations around the average value. The more volatile their day, the more cortisol they built up. So unlike testosterone levels, which are linked to financial return, cortisol levels relate more closely to financial uncertainty, of the type that traders face on a regular basis.

To test that idea more objectively, to duo measured the nebulous concept of financial uncertainty through a form of trading that's linked to it - the options market. Options are contracts that give owners the right to buy or sell something at a set price in the future. The value of these contracts depends heavily on how the value of the commodity at stake will change in the future, which makes the options market an effective measure of economic uncertainty. Using data from the options market, Coates and Herbert found that a trader's daily cortisol levels do indeed show a good match to overall levels of economic uncertainty.

It's more likely that cortisol responds to the state of the markets rather than the other way round, but it could also affect a trader's attitudes to risk, in the opposite direction to testosterone. Small bursts can improve both motivation and attention, but longer chronic exposures can cause anxiety and a tendency to overreact to imagined risks. 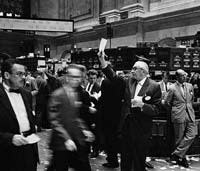 These effects could have large implications for entire markets and economies. In periods of constant stress, like market crashes or depressions, a perpetual supply of cortisol could make traders more averse to risk, which would exaggerate any downward spirals.

On the other hand, high levels of testosterone during bubbles and times of plenty, could amplify growth by stimulating the risk-taking antics of traders. However, Coates and Herbert speculate that traders who experience a continued rise in testosterone could eventually start to lose money, by becoming so risk-prone and impulsive that they start to make bad and unprofitable decisions.

Together, the opposing actions of testosterone and cortisol could help to make sense of the spiralling nature of bubbles and crashes and the often irrational decisions of people caught up in them. By pulling on behavioural puppet-strings, they could account for the unpredictable decisions that even experienced traders sometimes make.

These implications may seem grand, but Coates and Herbert remain modest about their results. Despite their efforts to run the study during a time when the markets are usually at their most volatile, they actually caught a period of unusual financial stability. Between that and the short 8-day sampling period, it isn't clear how a trader's hormones would respond over a longer time, or to a more unpredictable economic climate.

Nonetheless, they suggest that economic theories would be better served by taking heed of the ways in which basic biological processes like hormone production influences more complex behaviour. It's not just the minds of investors that drive economies, but their hormones too.