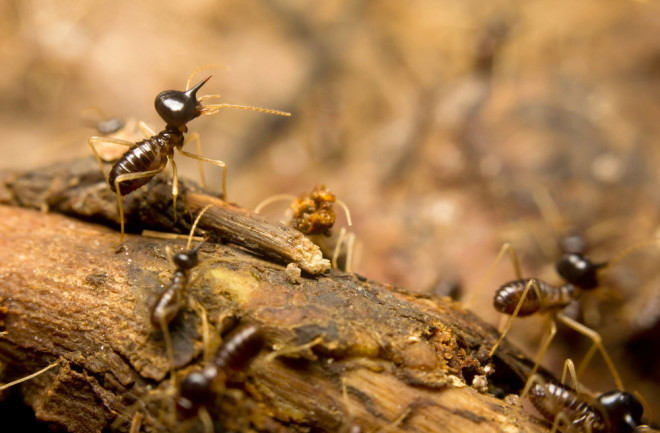 Termites scamper about on the rainforest floor in Borneo. (Credit: corlaffra/shutterstock) Termites are minuscule scourges to homeowners, but the wood-chomping critters are also masterful engineers. And now an international team of researchers has found that these construction skills actually help protect tropical rainforests from drought. The insects have an outsized impact on forest soils by helping control moisture in the dirt, a critical component to forest health that climate change and human impacts increasingly threaten. The results also suggest termites could buffer tropical rainforests from drought in the future. “We previously thought termites were important in tropical rainforests, but we didn’t know how important, particularly during drought,” said Louise Ashton, an ecologist at the University of Hong Kong, who led the new work.

Termites abound in tropical rainforests. And while Ashton and her colleagues suspected the insects impact the typically lush ecosystems, scientific circles give the bugs little attention (with the notable of exception of prominent biologist E.O. Wilson who has been making the case for the importance of insects for decades). Still, most research on termites revolves around the evolution of their social behavior or pest management. That’s beginning to change, but the bugs’ reputation means it’s taken years to get here. The new research published today in the journal Science took about a decade to come to fruition. Ten years ago, Theo Evans, an evolutionary biologist and ecologist at the University of Western Australia in Perth and co-author of the new research, met up with Paul Eggleton, an entomologist with England’s Natural History Museum in London, at a conference. Over a few beers, the duo decided they’d run some experiments to back up rumors that termites impact ecosystems murmuring through their research community. “The beer may have given us more confidence than was realistic,” recalls Evans, “because it took us years to get the collaborators and funding to run the experiment!”

The delay turned out to be serendipitous. The team set up their experiment in the rainforests of Borneo at the start of the 2015 El Nino drought. They set out toilet paper—a favorite termite food—treated with a poison that only affected the termites and not any of the areas’ other insects. Over the next few years, the team monitored the forests responses in the plots with fewer termites compared to plots where the termite population remained abundant. During the drought, termite activity doubled, the team found. And the termites’ hustle and bustle increased the soil moisture. The discovery means “termites were manipulating the water in the soil,” Evans said, which buffered the effects of drought. “This is the first time this has been discovered." The termites’ manipulation of soil moisture, which they do by transporting water using special water-sacs in their bodies, also improved seedling survival in the rainforests during the drought. “We tend to think of termites only as pests, but they are also helping the maintenance of healthy ecosystems during periods of environmental stress,” Ashton said. Those stresses include drought but also other human impacts such as logging and conversion to agriculture. “Droughts are predicted to become more common in rainforests due to climate change,” Evans added. “Logging, even selective logging (for valuable trees only) ... reduces termite diversity and abundance, so logged rainforests may be more vulnerable to climate change.”