Termite Queens Are Doin' It For Themselves 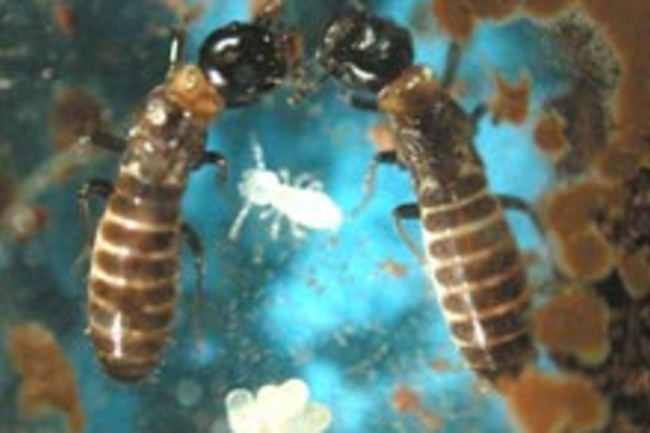 While the Eurythmics and Aretha Franklin were singing about female empowerment in the human species, they'd probably approve of this termite queen's activities. When it comes time for aging queens of the Japanese species Reticulitermes speratus to produce replacement queens, they don't bother to mate with their king and instead produce their daughters asexually, in a process called parthenogenesis.

Even when the queen dies, she maintains her genetic contribution to the colony. "This gives genetic momentum to the expression 'Long live the queen'" [ScienceNOW Daily News]

A termite colony starts when a king and queen pair up during an annual mating flight and settle down to start a family. At first, the couple produces worker and soldier termites that care for the nest. When the colony gets big enough, the king and queen start making alates--winged termites that leave home to find mates and start colonies of their own [ScienceNOW Daily News].

Finally, towards the end of her life, the queen has to produce several replacement queens to keep the colony going. In most species the king and queen mate to conceive these secondary queens, but that poses a problem before too long, when the king begins to mate with his daughters. This termite incest creates a next generation with reduced genetic diversity. To get around this problem, Reticulitermes queens ignore their kings when it comes time to produce the secondary queens, and instead make daughters who have only their mom's genetic material. In the study, published in Science, researchers explain the reason:

the replacement queens can mate with the king long after the original queen is gone without the danger of inbreeding to create bigger, stronger colonies faster [Scientific American].

While other insects are known to produce asexually, researchers say it was a surprise to find it happening in a social insect.

Other colony-based critters, such as bees and ants get around the inbreeding conundrum by creating new queens that leave to start their own colonies rather than stick around like the secondary termite queens [Scientific American].

Related Content: 80beats: Female Shark Gets Pregnant on Her Own, No Male Required 80beats: Ants That Illegally Procreate Are Revealed by Their Guilty Smell Discoblog: The Science of Virgin BirthImage: Kenji Matsuura