Tasmanian Superdevil, Hope of the Species, Is All Too Mortal 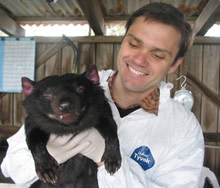 Researchers had high hopes for Cedric the Tasmanian devil: They believed he was the first member of the species to be immune to the deadly facial cancer that is rapidly devastating devil populations. Now, in a major setback, Cedric has grown two small tumors and researchers are back to square one. Many experts believe that the infectious cancer, called devil facial tumor disease, could drive the species to extinction within 20 years if it goes unchecked.

Cedric was captured in western Tasmania last year, along with his half-brother, Clinky. Both were injected with dead tumours by scientists. Clinky produced no antibodies, but Cedric did, and appeared to have built-in defences against the illness [BBC News].

However, the next step yielded worse results. Researchers injected two live strains of the disease into Cedric's cheek in an attempt to prove his immunity, but two small tumors grew at the injection sites. The tumors were surgically removed last week, and while Cedric is expected to make a full recovery, his

love life has been put on hold by the researchers. They were trying to get him to mate so he would pass on his genes. Now they're unsure if Cedric is naturally immune to the disease [ABC News].

The tumors were first noticed on Tasmanian devils in 1996 and are spread from one animal to the next through biting, which is an important part of the devils' social interactions and mating rituals. The facial tumors grow so large that they eventually prevent the devils from eating and seeing; they finally die of starvation. The cancer has already wiped out about half of the devils in Tasmania. While researchers will continue to conduct genetic tests on Cedric to investigate why he initially produced the antibodies, he is no longer considered the best and brightest hope to save the species, explains researcher Greg Woods.

Dead cells would be injected into more than 20 other devils to try to replicate the immune response, but there were no more plans to introduce the live disease, he said [The Age].

In the absence of any medical treatment for the disease, an

insurance program of "clean" animals is seen as the only sure way of saving the species. But the program's organisers said yesterday they still needed to secure hundreds more devils, many in mainland zoos, to guard against loss of the animal in the wild [The Age].

Researchers have also proposed building a fence to protect the few wild devil populations in western Tasmania that have not yet contracted the disease. Related Content: 80beats: One Quarter of World’s Mammals Are Threatened With Extinction 80beats: Tasmanian Devils Have Precocious Sex to Beat CancerImage: University of Tasmania