Tasmanian Devils' Social Networking May Spell Doom for the Species 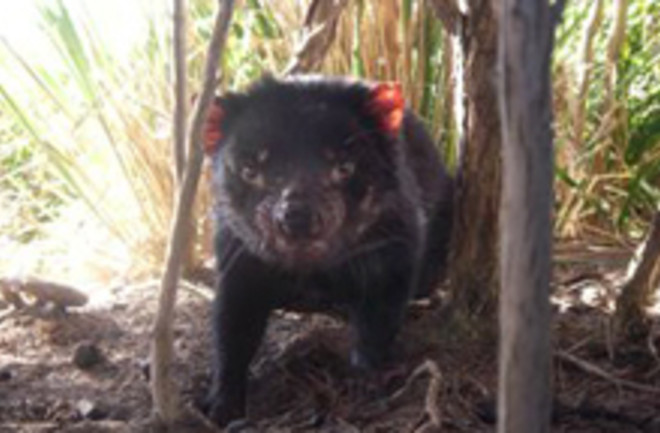 Saving Tasmanian devils from the infectious cancer that has quickly rendered the small marsupials an endangered species will be an even harder than we realized, according to a new study. The latest bad news from Tasmania: Researchers have found that devils are not solitary creatures with small social networks, but instead frequently interact with other devils, allowing for faster spread of the disease. The devastating cancer, known as devil facial tumor disease, is spread by biting, something the aggressive animals apparently do a lot of.

Investigating the social behaviour of devils, which are nocturnal, forest-dwelling and mate underground is tricky [ABC Science]

, notes lead researcher Rodrigo Hamede. To get around this difficulty, Hamede outfitted 46 wild devils in a disease-free area with radio collars that recorded every time one devil approached within 12 inches of another--close enough to bite. The scientists found that

all 27 of the devils from which intact collars were recovered belong to a single large social group. Each animal is connected to all the others, either directly or through connections with other animals. The finding suggests that if any one of the animals becomes infected with the facial tumor disease, the cancer would spread to the entire network [Science News].

In the study, to be published in the journal Ecology Letters,

Hamede also checked to see which animals in the network had the highest number of social contacts and were therefore most likely to infect others. Studies of human infectious diseases show 20% of individuals are responsible for 80% of infections. The plan was to characterise the devil 'super spreaders' so these could be targeted for removal [Australian Broadcasting Corporation].

But to Hamede's surprise, there wasn't a disruptive category of highly social devils. Instead, there was a steady stream of interactions between males and females during the mating season, and between females during the pup-rearing season. Some biologists are frantically looking for ways to halt the disease's progress, while others have suggested building fences to keep uninfected devil populations from contracting the cancer. Many experts believe they're in a race to save the iconic Australian animal from extinction. The IUCN estimates that as few as 10,000 mature adult devils remain, and the disease is now found in about 60 percent of the devil’s territory. Related Content: 80beats: Can a New Blood Test Save Tasmanian Devils From Extinction? 80beats: Tasmanian Superdevil, Hope of the Species, Is All Too Mortal 80beats: Tasmanian Devils Have Precocious Sex to Beat CancerImage: Rodrigo Hamede