Tasmanian Devils Are Rapidly Evolving Resistance to a Deadly Cancer 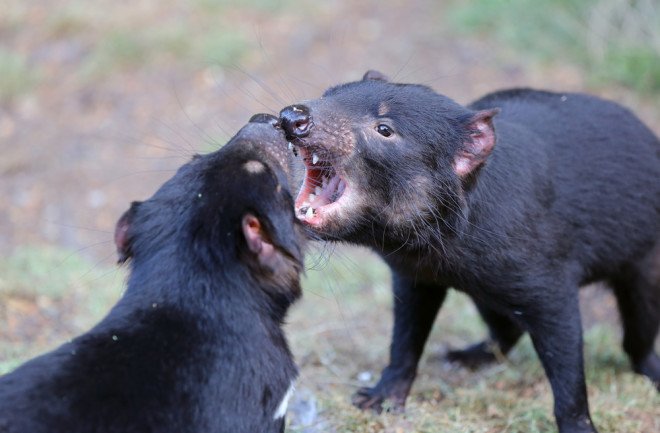 Devil facial tumor disease (DFTD) spreads when Tasmanian devils nip at each other's faces — a common behavior in social interactions. (Credit: Bernhard Richter/Shutterstock) Tasmanian devils are knocked down — we’re talking a 9-count — but they aren’t out. Not yet. In just over 20 years, devil facial tumor disease (DFTD) has ravaged Tasmanian devils on the Australian island state, resulting in an 80 percent overall decline in the iconic species’ numbers. The transmissible cancer, distinguished by red, oozing facial tumors, is nearly 100 percent fatal, with most devils meeting their end within 6 months of contracting the disease. Based on statistical models, devil populations on the eastern edge of the island, where field researchers first detected the disease in 1996, should already be extinct, but that hasn’t happened. Instead small populations are still hanging on, because, as new evidence suggests, Tasmanian devils might be rapidly evolving resistance to their deadly cancer. In other words, there’s hope.

Tasmanian devils are the largest carnivorous marsupial, and they’re notoriously violent animals that bite at each other’s faces during social encounters. That’s why the disease spreads so rapidly. In the process of sinking their teeth into each other, malignant cells from a DFTD-infected devil sprinkle into the open wounds of another devil, spreading the disease.

DFTD is a nasty disease. (Credit: Wikimedia Commons) As an apex predator, the Tasmanian devil represents the first domino in a line of many — should the devil go extinct, the loss will send ecological ripples down the Tasmanian food web. The devils keep fox and feral cat numbers low, protecting populations of eastern quoll, Tasmanian pademelon and Tasmanian betton, which are all endemic to the island. Biologist Menna Jones, of the University of Tasmania, has been leading the charge tracking, catching and taking samples from Tasmanian devils to monitor populations and the spread of the disease. It was her tireless work that allowed scientists to study how some devils are sticking around, defying predictions. Her vast library of tissue samples included specimens collected before the cancer took over the island and during its emergence — that’s crucial. “It’s unprecedented and unique to have so many samples,” said study co-author, and University of Idaho biologist Paul Hohenlohe during a press conference last week. Using samples from 294 devils from three different populations, researchers identified two regions of the devil genome that differed between pre- and post-DFTD emergence. Five of the seven genes contained in those regions are related to immune function and cancer risk in other mammals. These genes, researchers believe, might be conferring resistance to DFTD, because the cancer works by suppressing and hiding from the host’s immune system. Therefore, changes on these genes suggest the devil immune system is learning to recognize the stealthy threat. Moreover, these changes occurred within four to six generations in populations with relatively low genetic diversity — a rapid evolutionary response. Researchers published their findings Tuesday in the journal Nature Communications.

But there’s another twist to this story, and it hints at a deeper connection between devils and their devilish affliction. In 2015, researchers announced that they detected a

genetically distinct strain of DFTD in eight devils from southeast Tasmania — so now we have DFT1 (the “old” strain) and DFT2. The study published Tuesday focused only on DFT1, and researchers are currently working to learn as much as they can about DFT2. Surprisingly, the emergence of a second strain might be reason for some optimism. “The evolutionary emergence of the second tumor is curious,” says Washington State University evolutionary geneticist Andrew Storfer, a co-author of the study published Tuesday. “The chance of that happening within 20 years seems very remote.” That such a rare event would occur twice, independently in one species, and in such a short time, is an indication that the devils may have encountered this foe in the past. Storfer emphasizes that this is still speculation, an educated guess that will need to be tested. “Maybe they are just prone to transmissible cancers like this,” says Storfer. “Perhaps they’ve been through this before, and though devastating, they will make it again.”

For now, there are still many questions for scientists to answer. For one, how do these candidate devil genes confer cancer resistance? Storfer’s team is using gene editing to see how, or if, candidate devil genes disrupt tumor cell lines in a dish. They’re also working to understand the genetics of DFT2. Of course, the research begs even larger questions: How do cancers become transmissible in the first place? Can the Tasmanian devil’s plight teach us anything about cancers in humans? The findings, of course, offer hope for the devil’s future. Selective breeding programs, for example, could focus on introducing devils with DFTD resistance into the wild. Researchers might also someday craft a vaccine to prevent the disease in the first place. Or, the evolutionary tit-for-tat between the devils and DFTD might sort itself out. Regardless, Storfer thinks the days of the devil aren't over yet. “The models predicted extinction already, and they are surviving,” says Storfer. “At this point, I don’t think they are going to go extinct.”