In September last year, a team of scientists launched a squad of tiny animals into space aboard a Russian satellite. Once in orbit, the creatures were shunted into ventilated containers that exposed them to the vacuum of space. In this final frontier, they had no air and they were subjected to extreme dehydration, freezing temperatures, weightlessness and lashings of both cosmic and solar radiation. It's hard to imagine a more inhospitable environment for life but not only did the critters survive, they managed to reproduce on their return to Earth. Meet the planet's toughest animals - the tardigrades. 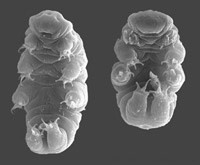 Tardigrades are small aquatic invertebrates that are also known as "water bears", after their impossibly cute shuffling walk (see video below). They also happen to be nigh-invincible and can tolerate extreme environments that would kill almost any other animal. They can take temperatures close to absolute zero, punishing doses of radiation and prolonged periods of drought. And now, they have become the only animals to have ever survived the raw vacuum of space.

Their stellar adventure began with Ingemar Jonsson from Kristianstad University, who really wanted to test the limits of their resilience. To that end, he launched adults from two species (Richtersius coronifer and Milnesium tardigradum) into space aboard the FOTON-M3 spacecraft, as part of a mission amusingly known as TARDIS (Tardigrades In Space). The tardinauts (I'm coining a word, go with it...) spent ten days in low Earth orbit, about 270km above sea level.

The tardigrades were sent into orbit in a dry, dormant state called a "tun" and it's this dessicated form that is the key to their extraordinary levels of endurance. By replaceing almost of the water in their bodies with a sugar called trehalose, they can escape many of the things that would otherwise kill them. Jonsson says, "Environmental agents that rely on water or the respiratory system don't work. You can put a dry tardigrade in pure alcohol and expose them to poisonous gases without killing them." Like Amy Winehouse then, only cute.

The ability to dry out completely is an adaptation to the tardigrades' precarious environment - damp pools or patches of water on moss or lichen that can easily evaporate. They have evolved to cope with sporadic drought and can stay dormant for years. All it takes to revive them is a drop of water, and that's exactly what happened when the TARDIS astronauts returned to Earth.

The majority of both species made it through the vacuum of space and the accompanying cosmic radiation, and were just as likely to still be alive as tardigrades that had remained on the planet. They even managed to lay viable eggs that hatched just as well as their planet-bound peers. Even the eggs themselves shrugged off the inhospitable conditions of space.

However, Jonsson did find a limit to their endurance - they struggled to cope with a combination of space vacuum and the high doses of ultraviolet radiation given off by the sun. If their containers were unshielded by UV filters, most of them died as the powerful radiation shattered their DNA.

But not all of them. Even faced with these harshest of conditions, a small number of hardcases survived. That's absolutely incredible - these animals were subjected to over 7000 kJm^-2 of UV radiation, about 350-700 times the amount that a Mediterranean sunbather would soak up. How they cope is a mystery, but Jonsson suggests that they must have very efficient means of repairing DNA damage.

So far, only lichens and bacteria have survived an unprotected brush with space, and tardigrades are the only animals to join this illustrious super-mile-high-club. If any other group of animals could accomplish the same feat, it would surely be the bdelloid rotifers, which I've blogged about before. They too are aquatic invertebrates that can enter a dormant, dried-out state and last year, researchers found that they are the most radiation-resistant of all animals, even more so than the super-hardy tardigrades.

But even tardigrades have weaknesses. I asked Jonsson how to go about killing one and it turns out that it's surprisingly easy. For all their resistance to cold, radiation and vacuums, they are "very vulnerable to mechanical damage". You could just squash them.