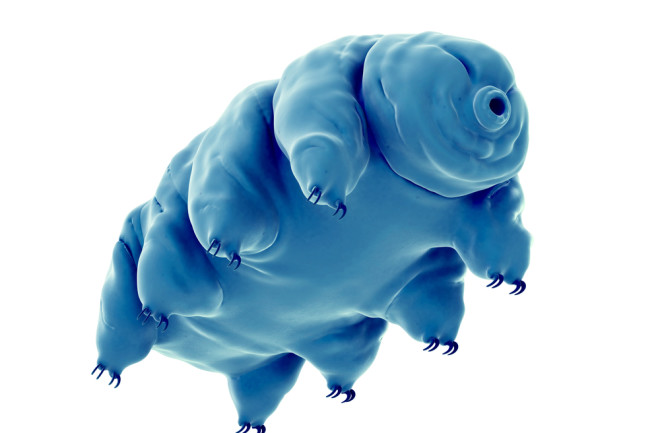 A new analysis of the tardigrade genome reveals that the microscopic creatures possess genetic adaptations shared with no other creatures on Earth.

Previous attempts to read the tardigrade’s genetic material have suffered from contamination issues that muddied the results. In the new study, researchers from Japan led by Takuma Hashimoto of the University of Tokyo say that they have taken every effort to avoid the mistakes of previous studies and have found several unique evolutionary tricks that allow tardigrades to survive conditions of extreme drought and high levels of radiation. What’s more, some of these adaptations were shown to work in human cells as well.

Often called “water bears” for their cute and cuddly appearance under the microscope, tardigrades are famed for their herculean survival skills. They have been found in Antarctica, in hot springs, on mountaintops in the Himalayas, and have even survived the cold vacuum of outer space. And, if conditions get too inhospitable even by their standards, they can enter a state of extreme hibernation, in some cases expunging all the water from their bodies, and wake up years later.

Given tardigrades’ reputation as an extremophile, researchers are interested in plumbing their genome for the secrets to their resilience. A study last year from researchers at the University of North Carolina at Chapel Hill purported to find that the creatures had received a significant portion of their genome, around 18 percent, from horizontal gene transfer (HGT), a process by which genes from bacteria and other organisms are copied into tardigrade DNA.

But those claims were quickly disputed in another paper from the University of Edinburgh, which found that the UNC researchers failed to properly account for contamination by outside sources. The second paper found little evidence of horizontal gene transfer in the tardigrade genome.

Building on the research, the Japanese scientists decided to sequence the genome of a different species of water bear, Ramazzottius varieornatus, considered among the most hardy of the tardigrades. Along with a few other species, this water bear can enter a state of suspended animation when conditions are bad by purging all of the water from its body. It can remain in that state until it gets rehydrated. R. varieornatus is also particularly resilient in the face of strong radiation.

The researchers took pains to avoid the mistakes in previous studies, using meticulous preparation techniques and eliminating data that looked suspicious. Ultimately, their findings aligned with the Edinburgh researchers — tardigrades genomes are almost completely unique, they say, only around 1.2 percent of their genes are the result of HGT. They published their findings Tuesday in Nature Communciations.

Of particular interest to the researchers were the genes that allowed the tardigrades to dry out and come back to life, and that allowed them to survive high levels of radiation. They found several regions of the genome unique to tardigrades that likely play a role in insulating their DNA from stress during harsh periods so their cells can survive undamaged. While we still don’t know how these genetic tweaks operate at the level of the cell or the whole organism, most of the adaptations seem focused on preserving or repairing DNA under stressful conditions

The scientists also took their research a step further and cultivated a line of human cells that produced a protein culled from the tardigrade genome. The protein, called Dsus, helps cells to prevent harmful breaks in DNA strands that can lead to fatal mutations. In tests using X-rays, the cells able to make the Dsus protein had about half as much damage as those without the protein. The genes coding for this protein weren’t found anywhere else, they say, meaning that the tardigrades must have come up with it on their own. It’s only one of many small modifications that allow tardigrades to survive in extreme environments.

The researchers hope to find more snippets of DNA that translate to human cells, potentially granting us a few of the superhuman traits of these microscopic wonders.