Taking steps one at a time or two: which burns more calories? 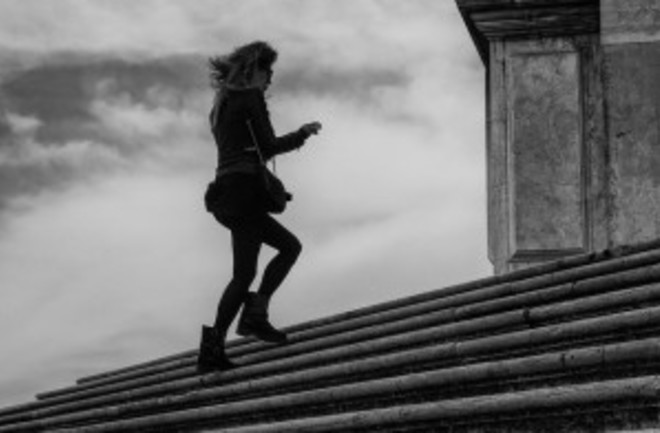 If you’re watching your waistline, you probably already know that taking the stairs can help you burn calories. But not everyone climbs stairs the same way. For example, there are those pesky over-achievers who take the stairs two at a time–they must be burning more calories for all that extra effort, right? Well, not so fast. These scientists set out to test whether taking the stairs two at a time really does burn more calories. And while we won’t spoil the punchline entirely for you, let’s just say that total calorie burn isn’t only related to the intensity of the exercise.

The energy expenditure of stair climbing one step and two steps at a time: estimations from measures of heart rate.

“Stairway climbing provides a ubiquitous and inconspicuous method of burning calories. While typically two strategies are employed for climbing stairs, climbing one stair step per stride or two steps per stride, research to date has not clarified if there are any differences in energy expenditure between them. Fourteen participants took part in two stair climbing trials whereby measures of heart rate were used to estimate energy expenditure during stairway ascent at speeds chosen by the participants. The relationship between rate of oxygen consumption ([Formula: see text]) and heart rate was calibrated for each participant using an inclined treadmill. The trials involved climbing up and down a 14.05 m high stairway, either ascending one step per stride or ascending two stair steps per stride. Single-step climbing used 8.5±0.1 kcal per min, whereas double step climbing used 9.2±0.1 kcal per min. These estimations are similar to equivalent measures in all previous studies, which have all directly measured [Formula: see text] The present study findings indicate that (1) treadmill-calibrated heart rate recordings can be used as a valid alternative to respirometry to ascertain rate of energy expenditure during stair climbing; (2) two step climbing invokes a higher rate of energy expenditure; however, one step climbing is energetically more expensive in total over the entirety of a stairway. Therefore to expend the maximum number of calories when climbing a set of stairs the single-step strategy is better.”