Tadpoles Learn to See With Eyes in Their Tails 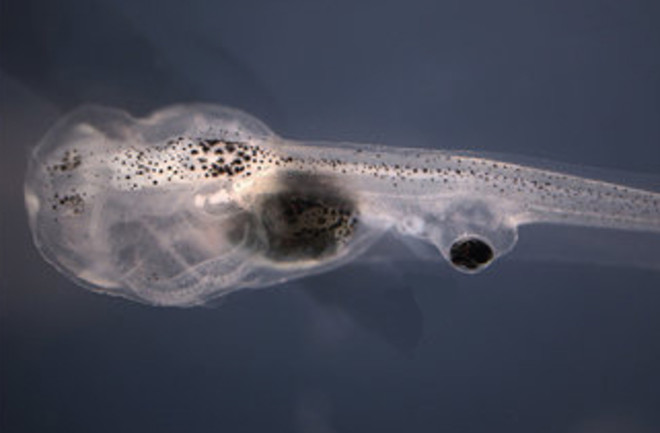 A tadpole with its eye transplanted to the tail. (Credit: Blackiston et. al) A migraine drug has given tadpoles the ability to see out of eyes in their tails. Researchers at Tuft's University transplanted the eyes of young African clawed frog tadpoles from their heads to their tails in an effort to study how their nervous system would adapt. They gave some of them the drug zolmitriptan, commonly used to treat migraines, and left others alone. Although nerves are often hesitant to grow, the tadpoles receiving the drug formed new connections between the transplanted eyes and their central nervous systems, giving them the ability to perceive light signals and follow shapes. The transplantation was easy enough; at such an early stage of development, tadpoles heal quickly, and the eyes integrated into their tails with little problem. The next step was to divide them into two groups, one that received the drug and one that didn't, and wait to see what happened. To aid their study, the researchers also modified the tadpoles' eyes to produce a fluorescent protein, allowing them to trace the development of new nerves. They published their work Thursday in Nature Regenerative Medicine.

Fluorescent proteins show the growth of new nerves after transplantation. (Credit: Blackiston et. al) In just under half of the tadpoles dosed with zolmitriptan, a network of glowing filamentous nerves spread from their eyes to their spinal cords, indicating that new growth. In those without the drug, no nerves appeared. Next up, to test eye functionality, the researchers placed them in a box and trained them to associate a red light with a light electric shock. The tadpoles learned to avoid red light, something that would only be possible if their eyes were working. They also used a similar setup with triangular shapes which the tadpoles also learned to avoid, indicating that they can perceive more than just colors. The tadpoles that didn't get the drug weren't nearly as good at learning to avoid visual stimuli. The experiment was an attempt to explore the larger question of how, and to what extent, the nervous system can heal itself following an injury. That the tadpoles, assisted by a drug already on the market, could form working connections with an organ transplanted to the other side of their bodies offers researchers a path forward. Any application in humans is far off, but the drug could help researchers find better ways to facilitate working eye transplants and kick off nerve growth.