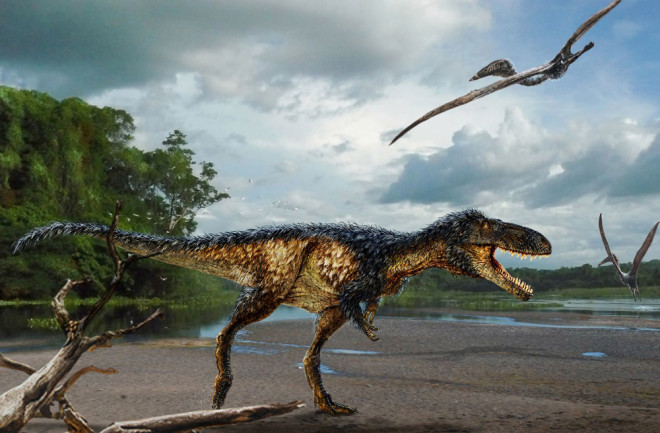 Timurlengia euotica is a transitional tyrannosaurid from 90 million years ago. (Credit: Todd Marshall)

“How does evolution make such a spectacular animal like T. rex?” marvels University of Edinburgh paleontologist Stephen Brusatte. It’s a long-running question that, in March, he helped answer.

We’ve known that T. rex and other giant tyrannosaurids, such as Tarbosaurus, evolved about 80 million years ago from much earlier, much smaller dinosaurs.

The big mystery was the crucial transition between a primitive little fella trying to survive and a highly evolved apex predator. Thanks to an analysis of fossils from the deserts of Uzbekistan, published in March by Brusatte and colleagues, we now know that missing link is the horse-sized Timurlengia euotica. It’s the only known tyrannosaur from the Middle Cretaceous.

Researchers reconstructed Timurlengia by combining its fragmentary fossils (shown in red) with bones from other, closely related tyrannosaurid species (in white). (Credit: Proceedings of the National Academy of Sciences)

“It had a big brain, and an ear well-tuned to picking up low frequencies. We thought that weapon was exclusive to the big T. rex arsenal,” says Brusatte. “We know the ear could pick up low frequencies because the cochlea was really long. That’s something we typically see in predators hunting things that are bigger than they are over a wide area. It’s a kind of super sense.”

According to Brusatte, Timurlengia proves these dinos evolved smarts first and size second: “Timurlengia pre-adapted their super powers, waiting for an opportunity to rise up the food chain. We know Timurlengia relied on speed and agility, and we can guess that it had a great sense of smell, like the larger, later tyrannosaurs. We’re also sure it was a nasty creature you didn’t want to run into.”