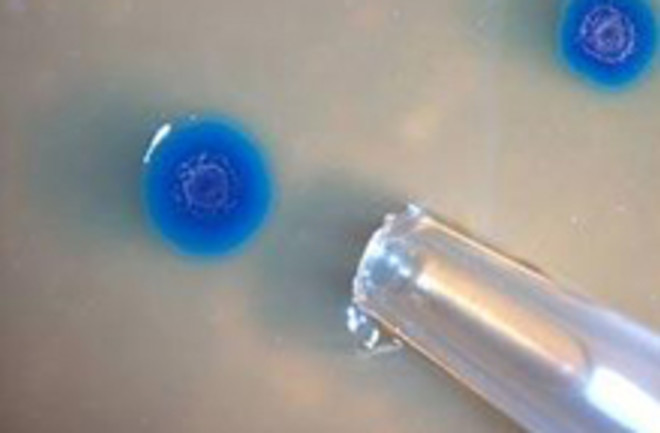 Although scientists may not have come close to cataloging all the different kinds of life on the planet, genetics pioneer Craig Venter is pressing ahead with his plans to create biology version 2.0. Venter is at the forefront of the new field of synthetic biology, in which scientists try to create all new organisms out of their component genetic parts:

, Venter has said. Now, he and his colleagues have taken the next step towards synthetic life. In a study published in Science, the researchers explain how they took the genome from the bacterium

Mycoplasma mycoides and transferred it to a yeast cell, where established genetic engineering techniques allow for easier tinkering. After altering the genome in several key ways, they transplanted it into the hollowed out shell of a different bacterial species,

Mycoplasma capricolum. The breakthrough came when the altered genome "booted up" and began instructing its host bacterium to produce colonies of M. mycoides.

That success will help researchers overcome a stubborn obstacle that has prevented the creation of a made-from-scratch life form. Last year, Venter's team created a synthetic bacterial genome

by stitching together pieces of synthesized DNA. To build a synthetic organism, however, researchers will have to transplant that synthetic genome into a cell and have it successfully reboot the cell. But that last step has proved problematic. The synthetic genome was assembled in yeast, which means it lacked some of the molecular markings characteristic of bacteria. Researchers discovered that without those markings, the host bacterium viewed the transplanted genome as a foreign invader and destroyed it [Technology Review].

In the new study, the researchers added chemical markings called methyl tags to the M. mycoides genome while it was in the yeast cell, permitting the genome to sneak past the host bacterium's defenses. What would be the point of creating strange new forms of life, other than to prove that we could? Synthetic biology experts say that re-engineered

microorganisms may take on all sorts of jobs. For now, gene researchers are particularly excited about using energy-producing microbes as single-celled refineries for ethanol, biodiesel or other petroleum substitutes without using food crops such as corn [Bloomberg].

There's big money to be made in such enterprises: ExxonMobil recently announced that it would invest $600 million in Venter's company, Synthetic Genomics, to work on making fuel from algae. While algae is a much more complicated organism than the simple bacteria Venter mucked around with in the Science article, the principles of genetic manipulation that he is discovering will no doubt come in handy down the research pipeline. Venter has a history of bold endeavors; in the 1990s he founded the private genomics company that raced federal scientists to complete the first draft of the human genome. He also has a reputation as an avid self-promoter with a habit of making big promises, so his latest statements about his team's progress on synthetic life come as little surprise.

“Assuming we don’t make any errors, I think it should work and we should have the first synthetic species by the end of the year,” he said [The Times].

That may sound optimistic, but since Venter's efforts on the human genome are widely credited for speeding the project to completion a full three years ahead of schedule, many scientists will be waiting with interest to see if 2009 is truly the year of "Mycoplasma laboratorium,"the first synthetic life. Related Content: 80beats: Could Exxon Go Green? Oil Giant Invests in Algae Biofuel Research 80beats: On the Quest for Synthetic Life, Scientists Build Their Own Cellular Protein Factory 80beats: Researcher’s Artificial DNA Works Almost Like the Real Thing DISCOVER: A Synthetic Genome Is Built From Scratch DISCOVER: Biologists Perform Genome Transplant DISCOVER: DISCOVER Dialogue: Geneticist Craig VenterImage: J. Craig Venter Institute