Switching on genes with a burst of blue light 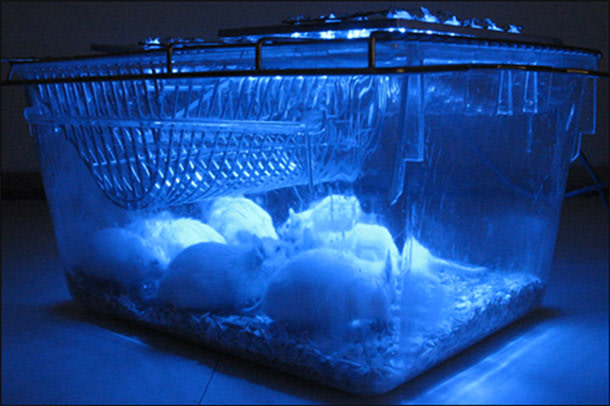 People with type 2 diabetes don’t respond properly to insulin, a hormone that controls the levels of sugar in their blood. Many of them have to take tablets to keep their sugar levels down, while others rely on insulin injections. But in a Swiss laboratory, there are diabetic mice with a more convenient solution. If they need more insulin, all they need is to bathe under a blue light. The mice are the work of Haifeng Ye from ETH Zurich, who has developed a way of turning on individual genes with bursts of light. Blue light in particular sets of a chemical chain reaction in the rodents’ bodies that eventually switches on a gene called GLP-1. It tells the pancreas to make more insulin, makes our cells more sensitive to this hormone, and makes us feel full. Ye’s work is a fusion of two of the most exciting methods in biology: optogenetics, the ability to control events in a cell using bursts of light; and synthetic biology, the building of new biological circuits that don’t exist in nature. In a related editorial, Brian Chow and Ed Boyden (one of the founders of optogenetics) call the new technique “synthetic physiology”. Ye began with a protein called melanopsin, which controls our body clock. It’s usually found in the cells of our retina, but Ye added it to human kidney cells instead. When melanopsin is hit by blue light, it triggers a surge of calcium. Ye rewired the kidney cells so that this calcium surge activates a gene called NFAT, a switch that can itself turn on other genes. By placing any gene under the control of NFAT, Ye can switch it on for specific chunks of time using beams of blue. To prove that this could work, Ye engineered his cells so that NFAT switched on the GLP-1 gene. He implanted the cells just under the skin of diabetic mice and placed them in a blue-lit chamber. A few hours later, their insulin levels shot up and their blood sugar levels went down (even if they’d taken a shot of sugar first). Ye’s study is no cure for diabetes yet. It’s a proof-of-concept – baby steps for a technique that has yet to break into a stride. For a start, surges of calcium do all sorts of things in our cells, so the burst of blue light may have unintended consequences that the team haven’t spotted yet. Martin Fussenegger, who led the study, says that concerns over side effects kept them from starting the project for a long time. “But when we finally did it, we observed no problems at all,” he says. Ye and Fussenegger are looking for industry partners to develop the technique for use in the clinic. In the meantime, they are focusing on a different application – manufacturing drugs that are difficult to produce. Again, they showed that this is possible. They rewired their cells to produce a protein called SEAP, by growing them in a vat (a “bioreactor”) and programming a blue light to shine upon. By controlling the patterns and timing of the light, they could create exacting amounts of the protein over a specified period of time. This level of control is a big challenge for the pharmaceutical industry. Ye achieved it with ease, and he did so without having to add any extra ingredients into the growing cells. 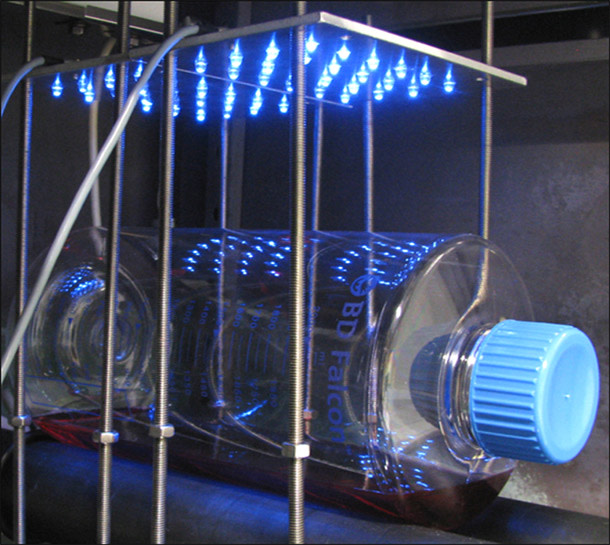 These potential uses for synthetic physiology are just scratching the surface. The team could use their technique to switch on genetic production lines that assemble cancer-fighting drugs inside a tumour. They could use it to treat inherited genetic disorders by switching on a working copy of a broken or missing gene in a carefully controlled way. Results like these are important for synthetic biology, a field that has tremendous potential but is often accused of providing little more than parlour tricks. Reference: Ye, baba, Peng &Fussenegger. 2011. A Synthetic Optogenetic Transcription Device Enhances Blood-Glucose Homeostasis in Mice. Science http://dx.doi.org/10.1126/science.1203535More on optogenetics: Shedding light on sex and violence in the brain