Swimming with Aliens of the Deep

From transparent bodies and glowing appendages to motion-sensing cells, these denizens of the deep are highly adapted for life in a world without light. 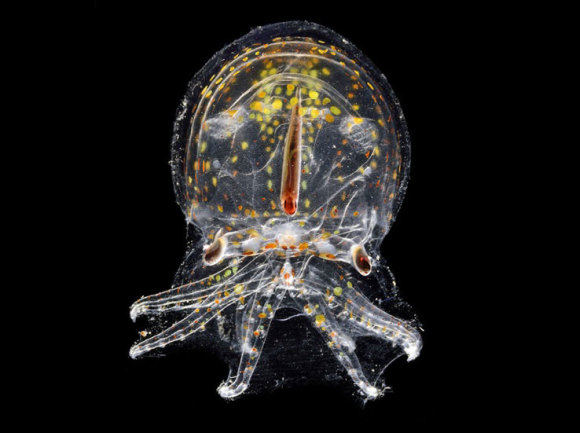 Although blue is the color most often associated with the world’s oceans, black is a far more apt descriptor for nearly 90 percent of our planet’s waters. Descending beneath the surface, the seemingly endless, light-flooded blue quickly fades, leaving nothing but utter darkness by a depth of roughly 200 meters (650 feet). Here, the largely unexplored and perpetually dark deep sea begins—a hidden, dreamlike world filled with fantastically weird creatures: gliding glass squid, flitting sea butterflies, and lurking viperfish.

Last winter, photographer and marine biologist Solvin Zankl joined a scientific expedition led by the GEOMAR research center in Germany to conduct deep sea biodiversity assessments around the islands of Cape Verde. The team explored the depths with cameras and lights, and used nets to bring an array of strange deep sea creatures to the surface. In his shipboard photography studio—outfitted with special aquariums and a powerful microscope—Zankl set out to capture the unique features and behaviors of these otherworldly organisms. This photo series offers rare glimpses of some of those creatures and the adaptations that enable them to survive and thrive in one of the planet’s most challenging environments.

Given its transparent body, the glass octopus, Vitreledonella richardi, remains one of the most elusive creatures of the deep sea. Rare photographs such as this reveal an array of opaque organs and a glimpse of its unusually shaped eyes. Scientists think the upward tilt and elongation of its rectangular eyes are adaptations to help the glass octopus avoid predation.

These photos originally appeared in bioGraphic, an online magazine featuring beautiful and surprising stories about nature and sustainability. 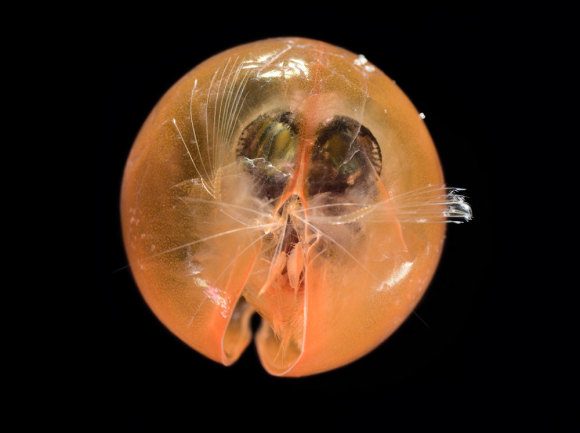 Ghoulish in appearance, creatures like this ostracod have thrived for millennia as little more than floating heads. Lacking segmentation, their bodies and heads are merged, tucked away into a globular shell along with the creature’s appendages. This particular ostracod species, Gigantocypris muelleri, has mirror-like reflectors for eyes that it uses to locate tiny, floating creatures of the deep. 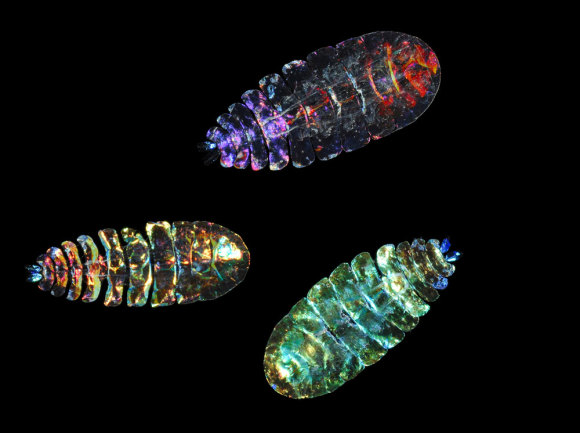 Male copepods—tiny aquatic crustaceans—of the genus Sapphirina glint like colorful jewels one moment and are nearly invisible the next.

Scientists only learned the details of this sea sapphire’s vanishing act a year ago. Cellular material measuring just nanometers in thickness separate the crystal plates of the copepod’s exoskeleton. The varying thickness of this material is what determines which wavelengths of light reflect back, and therefore which colors we see—if we see any at all. 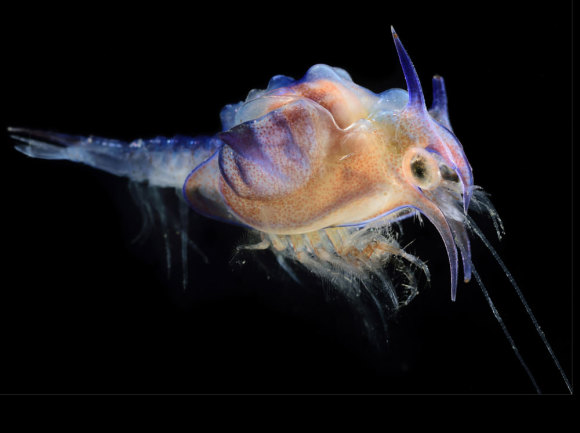 This little larval prawn, Plesiopenaeus armatus, is rarely spotted in the wild—except in the gut contents of other species—and for centuries, scientists failed to recognize the larvae’s connection to its adult form. Genetic analysis has since solved the mystery, proving that a species formerly known as the “monster larvae,” with external armor and devilish horns, transforms into a ruby-red, shrimp-like creature as an adult. 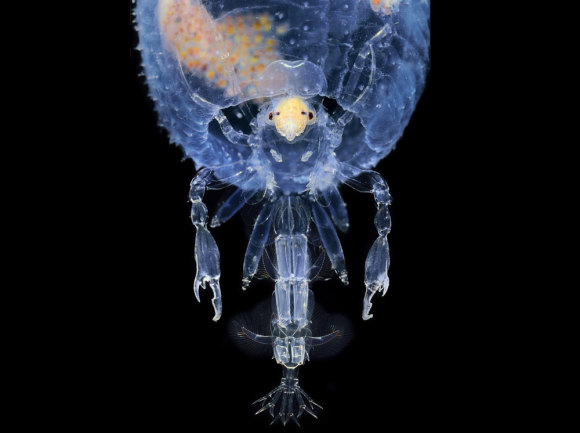 The thieving pram bug, genus Phronima, parades through the sea in a stolen, translucent mobile home. Females devour the gelatinous innards of a jelly-like sea creature known as a salp before crawling inside the salp’s exoskeleton to lay eggs. The female hangs on to the hollowed nursery with hooked claws, and propels it through the water to provide her larvae with a constant flow of water and food. 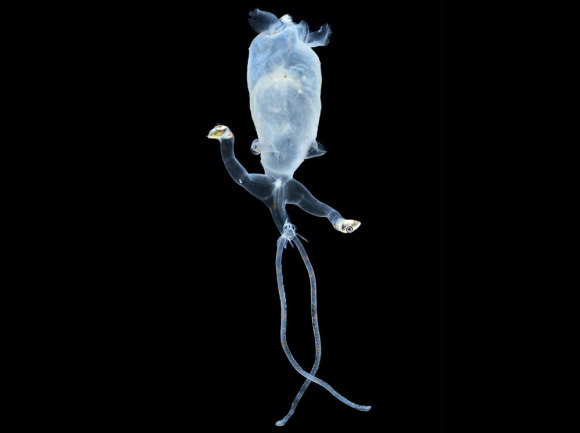 This juvenile glass squid, Bathothauma lyromma, haunts the waters with stalked, bulbous eyes and two short arms. Like many glass squids, members of this species contain light-emitting organs on their lower surfaces, which are used to fool predators and obscure the silhouette of their eyes. 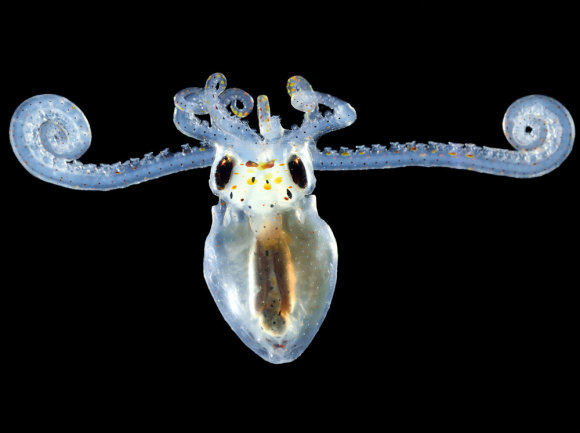 This larval long-arm octopus, Macrotritopus defilippi, will ultimately live up to its name by developing long, thin arms that stretch up to seven times the length of the octopus’s body. Scientists have reported instances in which this species has avoided predation by mimicking the shape, color, and behavior of a flounder fish while moving across the sea floor. 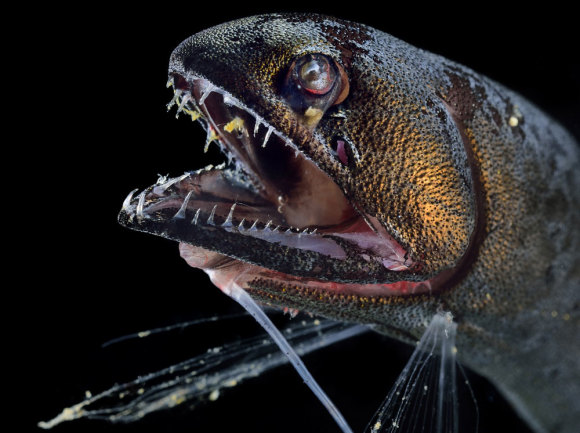 Trailing a barb from its lower jaw, the scaleless dragonfish, Bathophilus nigerrimus, bares spiky teeth to snatch prey, including crustaceans and small fish. Despite their menacing appearance, dragonfish actually have weak jaws. Ensuring that prey are well skewered is the key to this fish successfully bagging a meal 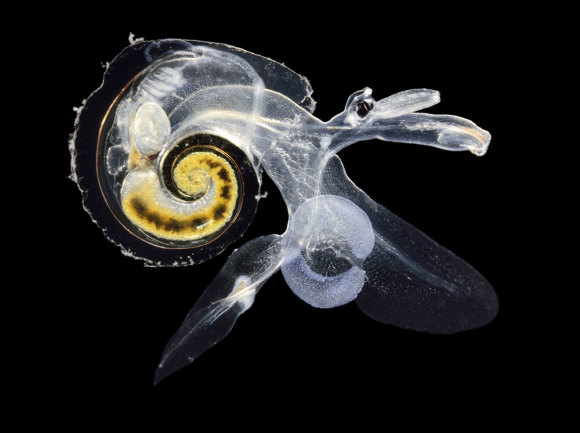 The marine snail, Atlanta inclinata, undulates its fin-like foot to propel itself forward and keep from sinking into the dark depths. At night, the snail secretes long strands of floating mucus to help it stay buoyant. The whorl of its translucent shell offers a safe haven for retreat when the mollusk is threatened by a predator. 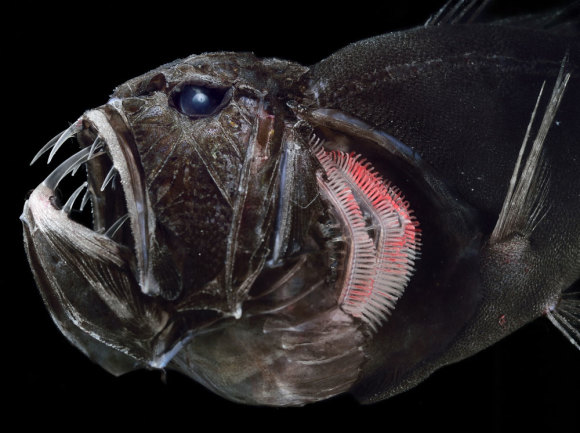 Bumping into a common fangtooth can be a deadly mistake for squid and smaller fish.

Because the predator has poor eyesight, it relies on the motion-sensing cells along its lateral line—an enlarged sensory strip that runs the length of the fish’s body—to detect prey. Juveniles lose the bright, plankton-filtering gills seen on this individual when they mature and descend into some of the deepest depths of any known fish, often more than 5,000 meters (16,000 feet) beneath the ocean surface.