Swifts Remain Airborne Up to 10 Months at a Time 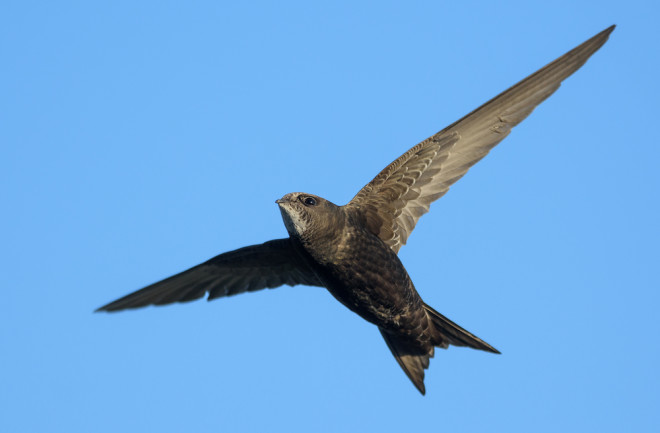 (Credit: Shutterstock) When a common swift kicks off from its breeding grounds north of the equator to return to more temperate climes, it likely won't touch earth until the following year. Swifts, with their darting movements and high-energy hunting habits seem to be poor candidates for the title of world's longest flyer. But according to a new study by researchers from Sweden's Lund University, the small birds take the record easily, with some staying aloft for up to 10 months at a time. Their research confirms a theory about swifts that has existed since the 1970s, when ornithologist Ronald Lockley hypothesized that the birds may simply never touch down after they fly south for the winter. Recognition of the swifts' endurance goes back even further, however — their species name apus means "footless" in Greek and depictions of the birds from Medieval times often showed them without any legs at all.

To put the mystery to rest, the team used tiny, lightweight trackers to follow the movements of 13 swifts as they migrated across the equator and back, monitoring some birds for up to two years. The trackers included light sensors used to home in on the birds' locations, and an accelerometer to measure their movements. They found that the birds seemingly never touched down — they remain in constant motion during the ten months they spend away from their breeding grounds. Only when they fly north to mate do they briefly take a load off to rear their young. Some of the birds they tracked came to rest briefly, the researchers say, but the overwhelming majority of their time during those 10 months, more than 99 percent, was still spent aloft. Other birds never came down once. They published their findings Thursday in Current Biology.

This means that all of their activities, from eating to sleeping to preening, must all take place on the wing. The researchers admit they are still puzzled by some aspects of the birds behavior. Of most interest to them is how the swifts consume enough calories to sustain constant flight. Other birds that take to the skies for long periods of time have the advantage of giant wingspans that allow them to coast on thermals over the ocean. Even the famously long-flying frigate bird can only spend around two months in the air. Tiny swifts outlast them by a factor of five. They do it on a diet of mainly insects. Swifts' scimitar-shaped wings and forked tails make them extremely agile flyers, suited to diving and swerving in pursuit of their nimble prey. Their hunting style consumes energy, which makes their choice to live primarily in the skies even more mysterious.

A Lot To Do In the Air

Staying in the air keeps you away from many predators, but how do they sleep? Frigate birds have been shown to nap mid-flight, and other species of birds sleep with one hemisphere of their brain at a time, but no such behavior has yet been observed in swifts. The Lund researchers' data suggests swifts may put themselves into a long, slow glide for a snooze. Swifts climb well over a mile into the air twice a day, at dusk and dawn, and the ensuing trip down could be perfect for a nap. They did notice another oddity in their data: Most of the swifts that did land briefly didn't molt, but those that remained aloft shed their feathers. The disparity could be an indicator of the birds' state of health, the researchers say, as healthy birds are both more likely to molt and remain in the air longer. This study may clear up the question of the swifts endurance, but in doing so, it raises a set of even more tantalizing questions. The researchers have now set their sights on determining how swifts stay in the air for so long, an area of research sure to yield more fascinating discoveries.