Supergene Allows Butterflies to Copy the Wings of Their Toxic Neighbors 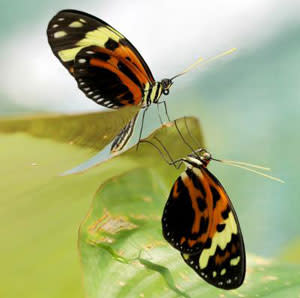 What’s the News: A single species of butterfly in the Amazon is able to copy the wing patterns of several neighboring species to avoid being eaten by hungry birds—a wide-ranging talent that has long perplexed evolutionary biologists. Now, an international team of scientists studying the mimicking butterfly Heliconius numata has finally solved this puzzle that plagued even Charles Darwin. Writing in the journal Nature

, researchers found that a specific supergene

—a cluster of genes that is passed on to offspring as one big chunk—controls the different elements of wing patterns, allowing related butterflies to display distinct markings despite having the same DNA. “These butterflies are the 'transformers' of the insect world,” lead researcher Mathieu Joron said in a prepared statement

. “But instead of being able to turn from a car into a robot with the flick of switch, a single genetic switch allows these insects to morph into several different mimetic forms.” What’s the Context: