Sunscreen: Healthy Habit for You, Bringer of Death for Coral Reefs 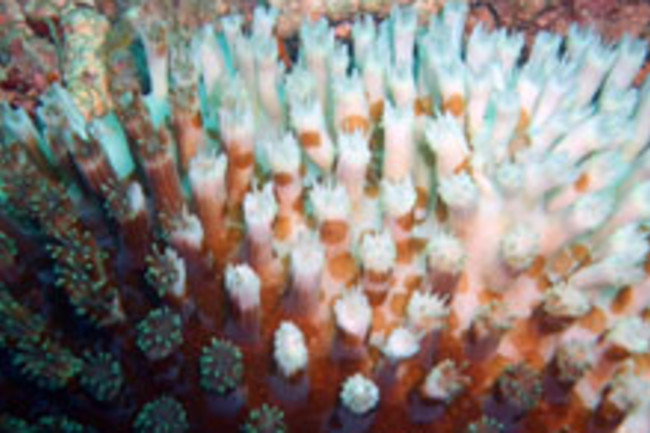 It can be annoying to emerge from a nice dip in the ocean just to reapply your sunscreen after it washed away in the surf. But according to a team of Italian scientists led by Roberto Danovaro, a mere annoyance for us could be a sign of doom for coral reefs. Corals exist in symbiosis with a kind of algae called zooxanthellae; the two organisms can't live without each other. The algae, however, don't take well to sunscreen, since they need UV light—without it, a virus that's normally latent in the unicellular organisms starts to go wild and kill them. Without the algae, corals have nothing to eat and no means of maintaining their vibrant color. They become "bleached," an obvious visual sign that the reef is in trouble. Two years ago, the government listed two species of coral as threatened under the Endangered Species Act for the first time, and scientists blamed global warming for thinning the reefs. Now, the researchers say, same goopy Banana Boat we use to save our skin from burning could be upsetting these underwater ecosystems even more by making the algae sick. It would take a lot of sunscreen to coat the ocean, but we're well on our way—the study reports that between 4,000 and 6,000 tons of sunblock wash off swimmers and into the ocean around reefs every year. Based on that, the researchers say, about 10 percent of the world's reefs could be threatened by sunscreen in the water. So we either need to find new coral-friendly formulas for our sunscreen, or hit the beach someplace else.