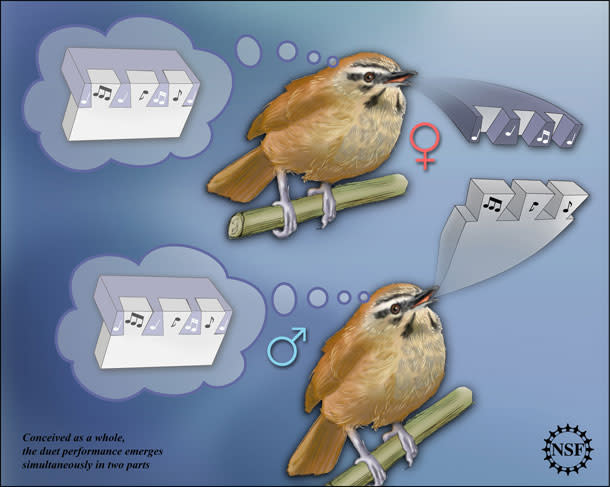 In the mountainous forests of Ecuador, you might hear this fast, lilting song: The melody sounds like it comes from a single bird, but it is actually sung by two: one male and one female. The couple alternates their syllables with almost unbelievable precision, each one placing its notes in the gaps left by its partner. The result is one of nature’s finest duets. And the singers are a pair of (rather drably named) plain-tailed wrens. By studying the singing wrens, Eric Fortune from Johns Hopkins University has found that each bird has brain circuits that encode the entire song. Rather than focusing on just their own contribution, they process the whole melody. Their duet is conceived as a whole in both their brains, but emerges as two distinct parts, one from each beak. Fortune studied the singing birds in the wild. “Before we done the study, we’d never seen the birds and we didn’t know where they lived,” he says. With the help of Ecuadorian naturalists, he found the birds on the side of Antisana volcano, living in thick bamboo thickets that he had to hack through with machetes. “When the birds are nearby, their song is actually painful to hear because it’s extremely loud,” says Fortune. “On the computer, you don’t get a sense of the power it has. It rings in your ear, and because it’s coming from two different locations, it’s very hard to localise.” Across 15 months, Fortune recorded over 150 hours of wren songs. He noticed that both males and females also sing on their own. Their produce exactly the same notes that they would do in the duet, leaving odd gaps in the places where their partners would fill.

This suggested that the duetting wrens might just be singing their individual parts, relying on faultless timing to stitch the two songs together into one. That’s less of a partnership, and more two birds shouting simultaneously and somehow failing to sing over each other. This idea is consistent with studies in other songbirds but it can’t be the real story for the wrens. Fortune found that when the birds sing alone, they leave longer gaps than they would do when singing together. This suggests that they tailor the timing of their notes to what their partners are doing, using each syllable as a cue to produce the next one. That became obvious when the males screw up (and they often do). In several of Fortune’s recordings, the males often fumbled their notes in the middle of long sequences. When this happened, the females carried on and left longer gaps than usual between their syllables. It seems the female takes the lead in the duet, setting the rhythm that the male then follows. The field recordings were intriguing, but Fortune wanted to understand what was happening the birds’ brains when they sang together. To find out, he captured six wrens and played them a variety of tunes, both solos and duets. While they listened, Fortune recorded the activity in their HVC – a part of the songbird brain responsible for learning and producing songs. The majority of the wrens’ HVC neurons responded more strongly to the full duet than to the individual songs put together. And in both birds, the female syllables trigger stronger responses in the HVC than the male ones. That flies in the face of previous studies: it’s surprising enough that the birds’ HVCs are responding to the songs of other birds atall, let alone more strongly than to their own notes. Both wrens have clearly encoded the whole duet in their heads, and that both are aware that the female takes the lead. They seem almost wired for cooperation – their brains buzz more strongly when they’re singing together than apart. Fortune thinks that the same thing could apply to other species. He writes, “Consider, for example, two people cooperating to dance a tango. Certainly each person knows his or her own part of the dance and possibly the partner’s contribution, but these data suggest that premotor circuits in both individuals preferentially encode the combined cooperative behavior.” 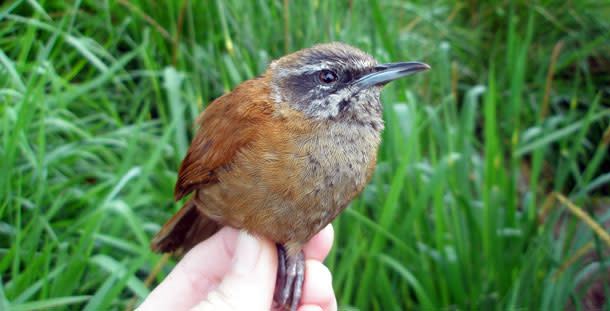