You've probably seen short animations of the storm. Now, watch its evolution through most of its lifespan. 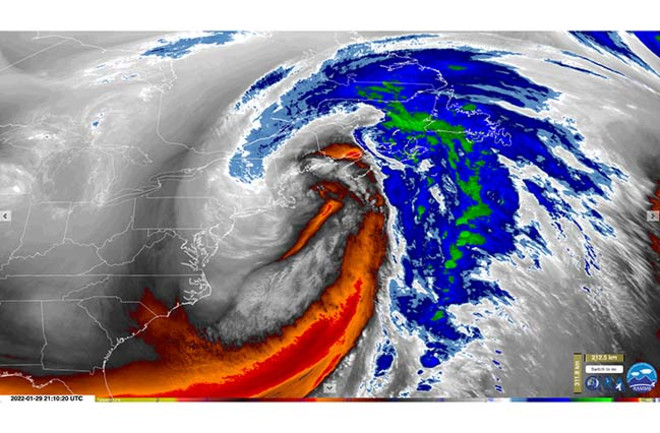 An infrared view of the deadly Nor'easter that pummeled the U.S. Northeast and Canada's Maritime provinces. (Credit: RAMMB/CIRA)

Tens of millions of people are finally digging out from the record-setting storm that dumped at least a foot of snow from Maryland to Maine and into Canada's Maritime Provinces.

With near-hurricane-strength winds in places, the ferocious bomb cyclone caused vast power outages. It was unfortunately tied to the deaths of at least two people.

From it's geostationary orbital perch about 22,300 miles up in space, the GOES-16 weather satellite viewed the entire evolution of the ferocious storm: from it's birth off the Carolinas, to it's explosive growth in a process scientists call "bombogenesis," and it's sweeping movement past New England and into Canada.

While news accounts of the storm provided snippets of compelling satellite imagery, I haven't seen animations of the storm's entire lifespan, or at least most of it. With that in mind, I thought that I'd create several animations that do just that.

This first one consists of infrared imagery from the GOES-16 weather satellite:

This view was captured by the mid-level water vapor band on the satellite's ABI instrument. Forecasters use this particular infrared band to track jet streams and storm motions, and also to monitor the potential for severe weather.

The animation begins on January 28, 2022, as conditions were just coming together to give birth to the storm. It continues with the explosive development of the storm on the 29th, and ends on the 30th, with the center of the storm swirling over the Canadian Maritime Provinces. (The animation repeats several times, as do the ones that follow.)

This next animation shows the same view over the same period, but using a different enhancement of infrared imagery:

This view uses what scientists call the "Air Mass RGB" enhancement. It helps forecasters identify the large-scale atmospheric conditions that can give rise to cyclonic storms.

In the animation, you'll also see dark blue and purple colors, which show areas of very cold air. These colors become increasingly visible after the storm sweeps through, ushering in a friged airmass behind it.

Lastly, this next view may look more recognizable:

Like the others, this animation of GOES-16 imagery shows the January 2022 Nor'easter through most of its lifespan. But this time it features what's known as GeoColor imagery, which provides a close approximation to what we'd see with our eyes during daytime. At night, the view transitions into the infrared. This allows forecasters to see what's going on in the atmosphere under the cloak of night, and in particular to differentiate between low-level liquid water clouds and higher ice clouds. Lastly, city lights are also visible thanks to data provided by instruments aboard other satellites. By revealing major cities and other features, this helps us get our geographic bearings.