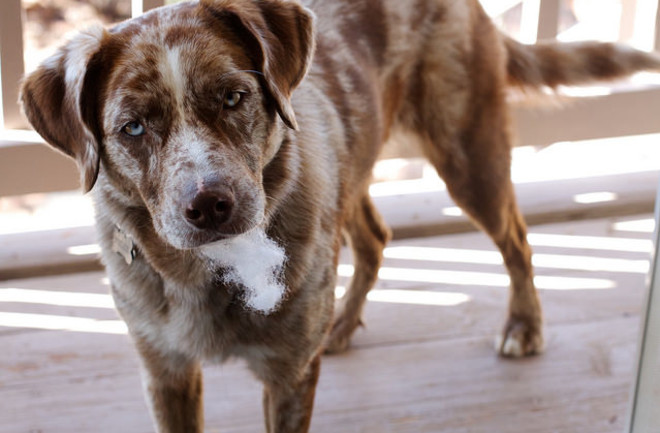 We know that dogs have a guilty look, but can they actually be guilty? Well, according to this study, the answer is... kind of. Here, researchers show that dogs are capable of "deceptive-like behavior." In a set of experiments, dogs tended to lead a human "competitor" away from food when that human would keep it for himself. However, the same dogs happily lead their "cooperative" owner to the noms, who would give the food to the dog. Bad dog!

Deceptive-like behaviour in dogs (Canis familiaris) "Deception, the use of false signals to modify the behaviour of the receiver, occurs in low frequencies even in stable signalling systems. For example, it can be advantageous for subordinate individuals to deceive in competitive situations. We investigated in a three-way choice task whether dogs are able to mislead a human competitor, i.e. if they are capable of tactical deception. During training, dogs experienced the role of their owner, as always being cooperative, and two unfamiliar humans, one acting ‘cooperatively’ by giving food and the other being ‘competitive’ and keeping the food for themselves. During the test, the dog had the options to lead one of these partners to one of the three potential food locations: one contained a favoured food item, the other a non-preferred food item and the third remained empty. After having led one of the partners, the dog always had the possibility of leading its cooperative owner to one of the food locations. Therefore, a dog would have a direct benefit from misleading the competitive partner since it would then get another chance to receive the preferred food from the owner. On the first test day, the dogs led the cooperative partner to the preferred food box more often than expected by chance and more often than the competitive partner. On the second day, they even led the competitive partner less often to the preferred food than expected by chance and more often to the empty box than the cooperative partner. These results show that dogs distinguished between the cooperative and the competitive partner, and indicate the flexibility of dogs to adjust their behaviour and that they are able to use tactical deception." Related content: Cutest MRI ever shows that most dogs prefer praise over food.Flashback Friday: Do dogs really have a “guilty look”?Yes, dogs really can feel jealous.