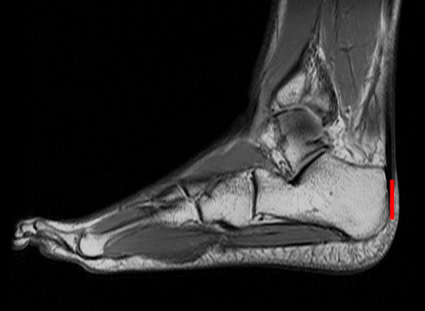 Neanderthals: They weren't really into distance running. According to research by David Raichlen in the Journal of Human Evolution, they were more the power walking type: The shape of a Homo sapiens heel compared to that of a Neanderthal would have allowed our ancestors to be much more efficient runners over long distances. Raichlen stated with living humans, studying them as they ran on treadmills.

By looking at MRI scans of their ankles, he found that the distance between a point on the heel bone just below the ankle bone, and the back of the heel bone where the Achilles tendon attaches, was proportional to the runner's efficiency. The shorter this distance, the greater is the force applied to stretch the tendon - and the more energy is stored in it. This means that people with shorter distances are more efficient runners, using less energy to run for longer. [New Scientist]

With this knowledge, Raichlen and colleagues looked at the remains of Neanderthals

as well as humans of the same era. The difference, he says, was distinct.

Neanderthal remains revealed that the hominids had longer heel bones, giving them less of a springy step and making them ill-suited to running. But the taller bones may have provided more stability when walking, the researchers suggest. Why did Neanderthals become brawny and Homo sapiens fleet of foot? Based on what anthropologists know about where and how they lived, it makes some sense. On the balmy savannas of Africa, one of early humans' hunting strategies could have been to chase animal prey on marathon runs until the creature got heat exhaustion and gave out. Neanderthals, however, are known to have lived further north in cooler climates, where such a strategy wouldn't pay off.

Since there is an inherent trade-off between speed and strength in species throughout the animal kingdom, it is likely that Neanderthals were built more for brawn, with humans evolving lighter, more aerodynamic bodies for running. (This doesn't take into account food consumption and other behavioral factors that can add heft.) [Discovery News]

But don't get too smug about your marathon prowess, humans. The true distance runners in the animals kingdom are ostriches, who scoot along with twice the efficiency