Study: Giant Storks Roamed the Island of the Hominid "Hobbits" 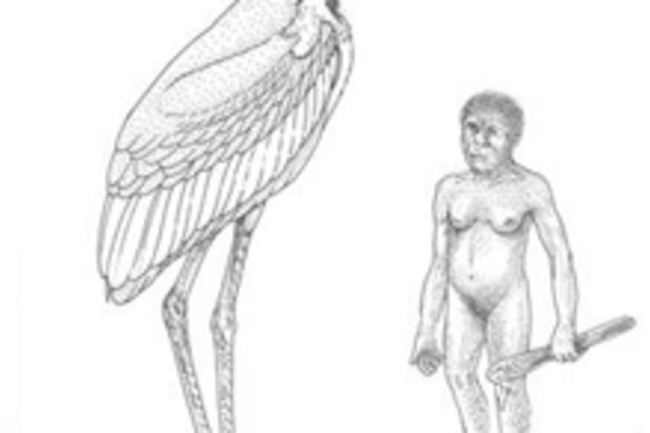 So did the hobbits and the giant storks live in peaceful harmony, or did they try to kill each other? On the island of Flores, the same place where controversial evidence of the tiny ancient hominid Homo floresiensis turned up in 2003, scientists found large leg bones in a cave. A new analysis of those bones published in the Zoological Journal of the Linnean Society indicates that they belong to giant storks taller than any alive today, capable of towering over the Homo floresiensis "hobbits."

"From the size of its bones, we initially were expecting a giant raptor, which are commonly found on islands, not a stork," said Hanneke Meijer, a vertebrate paleontologist at the Smithsonian Institution in Washington. The carnivorous giant (Leptoptilos robustus) was a hitherto unknown species of marabou stork, among the largest birds alive on the planet. [MSNBC]

At about 6 feet in height, the great stork would have stood nearly twice the height of H. floresiensis individuals, who reached just about three and a half feet tall. And like many other over-sized birds, the stork likely wasn't the flying type. Says Meijer:

“Fly? Not very well, I think. They wouldn’t have gone very far if they could even get off the ground. But I don’t think they needed to fly. They were the top predator of that ecosystem.” [Toronto Star]

That brings up the question of just how Leptoptilos robustus made it to an island to begin with. Meijer's idea is that smaller birds flew to Flores—which was never connected to the Asian mainland—and then evolved a great size because of the island's peculiar conditions.

This phenomenon is known as the "island factor", and is thought to have been triggered by few mammalian predators being on the island. That led to abundant prey species becoming smaller, and other predators becoming larger. "Larger mammals, such as elephants and primates, show a distinct decrease in size, whereas the smaller mammals such as rodents, and birds, have increased in size," explains Dr Meijer. Among the giants evolved the giant stork, and the giant rat, Papagomys armandvillei, as well as Komodo dragons, the largest surviving species of lizard. [BBC News]

The stork's predatory dominance leads to the titillating question of whether these huge birds made floresiensis their prey, or conversely, if the little hominids made a valiant effort to hunt the big birds. Given the size disparity, Meijer says, the stork could easily have picked off a few "hobbits," especially juveniles. (Insert joke about storks taking away babies instead of bringing them.) But there's no evidence of that. Neither are there cut marks on bird bones to show floresiensis hunting the mighty fowl. Related Content: 80beats: The Debate Continues: Another Skull Study Supports the “Hobbit”

The Loom: Return to Hobbit Limbo

The Loom: The Hobbit’s Brain