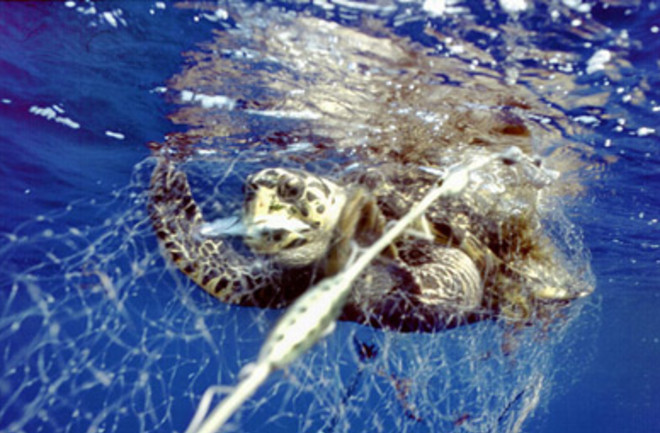 We already knew that great numbers of sea turtles are killed when they're caught up in the nets used by fishing operations around the world. But according to a study in Conservation Letters, the actual number of turtles accidentally killed over the last two decades has been vastly underestimated: Rather than counting in tens of thousands, study author Bryan Wallace argues, commercial fishing has probably killed sea turtles in the millions. The official records show about 85,000 turtles killed by fishing operations from 1990 to 2008. But Wallace, the science adviser for Conservation International's sea turtle program, says that's deceptively small accounting.

"Because the reports we reviewed typically covered less than 1% of all fleets, with little or no information from small-scale fisheries around the world, we conservatively estimate that the true total is probably not in tens of thousands, but in the millions of turtles taken as bycatch in the past two decades," said Dr Wallace [BBC News]

. Six of the seven sea turtle species are presently listed as in danger.

They include loggerheads, leatherbacks, hawksbills, Olive Ridleys, Kemp's Ridleys and green sea turtles; the flatback, an endemic to Australia, is currently categorized as Data Deficient [CNN]

"Trawlers are completely indiscriminate. The target might be shrimp but for every pound of shrimp that might comp up with a given haul, there might have five or 20lbs of bycatch. That could be turtles, it could be all sorts of things," said Wallace [The Guardian]

. However, trawls—which drag along the seafloor—can be equipped with "turtle excluder devices," or TEDs, which are designed to keep out large marine mammals and come with a kind of trapdoor for turtles that are accidentally trapped. Some countries even require shrimp boats to carry them. "Long lines" stretch for miles behind the boat with baited hooks. But gillnets, National Geographic argues, might be the worst offenders because turtles ensnared in them have the least chance to reach the surface to breathe. It's true that Wallace's numbers are an extrapolation reached by the records that happened to be available (it would be rather time-consuming and expensive to survey small fishing operations all around the world). So there's plenty of margin for error in the study's guesses, and the National Fisheries Institute keyed on that fact to call the study something "outside of ground-truth science." But even if Wallace's numbers—which he calls conservative estimates— turn out to be a little exaggerated, it still means that the totals for turtles killed are far greater than the previous studies he looked at would suggest. Some further study of small fishing operations could help figure out how close the study's extrapolations are, but in the meantime, sea turtles need all the help they can get. Wallace says he thinks that better catching systems like TEDs could dramatically reduce the total of accidentally killed turtles. That's crucial, he says, because while fisherman have no particular malice toward turtles, asking them to save the sea reptiles out of altruism is just unrealistic.

"It is really tricky," he said. "You can imagine if you are a small-scale fisherman and your gillnet is your meal ticket and you've got a big leatherback that's stuck and entangled in this thing–you are risking your own life trying to free the turtle" [National Geographic]

. Related Content: 80beats: Turtle Shell Develops Through Embryonic Origami 80beats: A Clue to the Evolutionary Riddle of How the Turtle Got Its Shell 80beats: Proposal to Regulate De-Finning of Sharks De-Feated The Intersection: Do We Need Leatherback Turtles? DISCOVER: Sweeping the Ocean Floor, where strange sea creatures are caught on film Image: Projeto Tamar Brazil, Image Bank