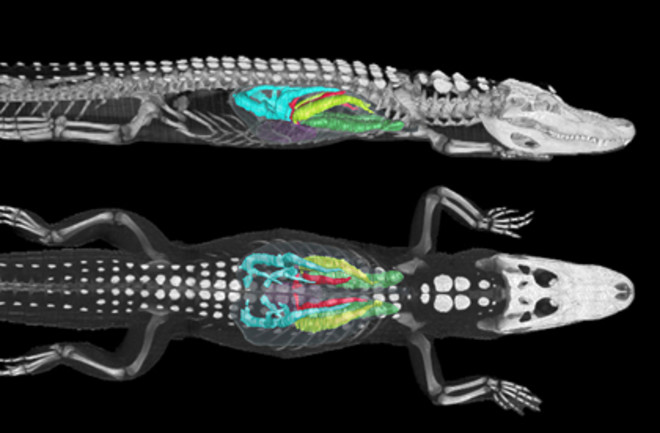 Alligators breathe like birds, with a one-way tube that flows all the way through their respiratory systems. While that might not seem earth-shattering at first, alligators and birds diverged 246 million years ago. And according to a new study in Science, that means this breathing technique goes way, way back, and could even explain how the ancestors of dinosaurs survived the great Permian-Triassic extinction.

Unlike a mammal’s breath, which exits the lungs from the same dead-end chambers it enters, a bird’s breath takes a loopy one-way street through its lungs [Science News]

. This breathing technique allows birds to explore high altitudes where oxygen levels drop off significantly. If the archosaurs—ancestors to birds and alligators—breathed this way, it could have given them an advantage when oxygen level tanked 250 million years ago and lots of species died off.

Before the extinction, synapsids, the ancestors to modern mammals, were the dominant group. But after the extinction, the archosaurs dwarfed the synapsids, Farmer said. Prestosuchids, for example, could reach 23 feet in length, while mammals’ ancestors maxed out at just a few feet [Wired.com]

. One burning question remains, though: How the heck did we miss this for so long?

“People incorrectly believe that you must have avian-style air sacs in order to have unidirectional flow,” says C.G. Farmer of the University of Utah, a coauthor of the new study. “Alligators don’t have air sacs, so no one ever looked” [Science News]

. But there it was, hiding in plain sight—presuming you have the stomach to study alligator lungs. Related Links: 80beats: New Fossil Suggests Dinosaur World Domination Started in South America 80beats: Found: Dino-Munching Crocodiles Who Swam in the Sahara 80beats: Extinct Goat Tried Out Reptilian, Cold-Blooded Living (It Didn't Work) 80beats: Dinosaurs Ruled the World Because They "Got Lucky," Say Scientists

More From Discover
Environment
How Scientists Are Bringing Back Sturgeons, Fish That Once Swam With Dinosaurs
The Sciences
How Do Dogs Sniff Out Diseases?
Mind
Why Do Some People Love Watching Animals Fight?
Environment
Can Solar Farms Help Save Bees?
Planet Earth
10 Animals That Make 'Milk' and Aren’t Mammals
Planet Earth
Sexual Cannibalism: Why Females Sometimes Eat Their Mates After Sex
Recommendations From Our Store
My Science ShopCosmos: Possible Worlds
My Science ShopStrange Science
My Science ShopEinstein's Universe
My Science ShopElements Flashcards
Shop Now
Stay Curious
Join
Our List