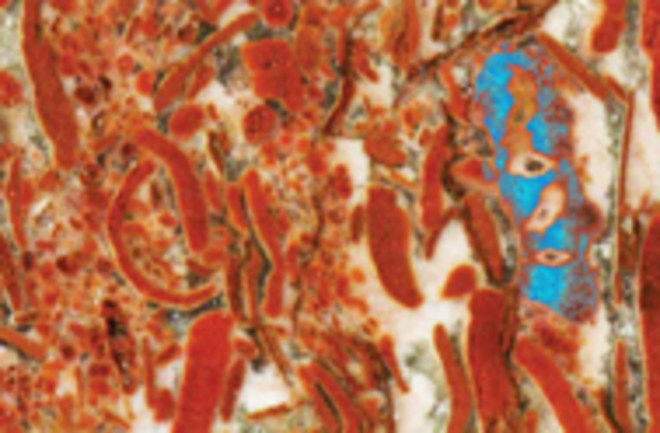 Sponges are just about the simplest animals on the Earth. And they might be the oldest ones we know, too. Adam Maloof and colleagues published a study in Nature Geoscience this week about their find that could push back the oldest known animal life by 70 million years. In Australia, Maloof says, the team found remains of ancient sponges dating to about 650 million years ago.

At 650 million years old, the sponges would predate the Cambrian Explosion

—a huge blossoming of diversity in animal life—by 100 million years. These organisms would also predate an intense moment in our planet's history known as "Snowball Earth

," according to paleobiologist Martin Brasier

. It's even possible that they helped cause it.

A few million years after the sponges were around a glaciation extended to the equator, wiping out large swathes of life. Brasier argues that in the absence of more complex creatures that can recycle debris, like worms, the carbon in early life forms got buried in a constantly growing carbon sink, sucking carbon dioxide out of the air and causing global cooling. Sponges would have contributed to such a cooling sink, he says [New Scientist].

According to Maloof, his team found the fossils by sheer accident: They were digging around in Australia for clues about the climate of the past, and first wrote off the finds as mere mud chips.

"But then we noticed these repeated shapes that we were finding everywhere - wishbones, rings, perforated slabs and anvils. By the second year, we realised we had stumbled upon some sort of organism, and we decided to analyse the fossils. No-one was expecting that we would find animals that lived before the ice age, and since animals probably did not evolve twice, we are suddenly confronted with the question of how some relative of these reef-dwelling animals survived the 'snowball Earth'" [BBC News].

The analysis itself was no picnic. To perform an x-ray or CT examination

of fossils, you need to be looking at a fossil that has a different density than the surrounding rock. But the sponges were essentially the same density, forcing Maloof's team to get creative.

To get around this problem, the researchers used what Maloof called a "serial grinder and imager." One of 32 collected block samples from the formation was shaved off 50 microns at a time -- about half the width of a human hair -- and then photographed after each minute shaving. The images were then stacked to create complete three-dimensional models of two of the sponge fossils [Discovery News].

However, there may be controversy to come on this finding. The Australian reports

on geologists from that country pooh-poohing the find by their American rivals and saying they have better and older fossils. Related Content: DISCOVER: Set Your CT Scanner To Kill And Look Inside Some Fossils

DISCOVER: You're More Like a Sponge Than a Comb Jelly