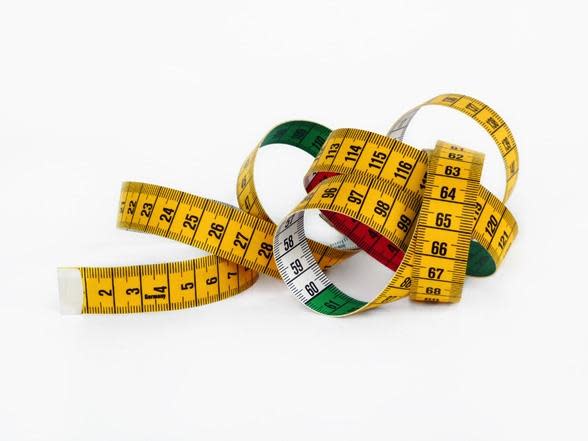 Weight is a big issue in America. More than half of Americans are unhappy with their weight, spending 33 billion on dieting and weight loss programs and products every year. This obsession starts younger than we'd like to admit, as 80 percent of 10 year old girls will say they are on a diet. But whether you count the millions dissatisfied with their looks, the percentage trying to lose weight, or the billions wasted on pills and fad diets, the message is the same: being the ideal weight matters, and it matters a lot. But what is the ideal weight? Doctors say somewhere between a BMI of 20 to 25. Looking at runway models, you'd think it was just this side of starving, as the stick figures that grace our catwalks have an average BMI of only 16. Ask the average man and... well, actually, that will depend on a number of things, including his mood. A number of factors affect what weight a guy prefers a woman to be, and evolution is to blame. For a long time, scientists have believed that attractiveness is really just our way of interpreting how good a person will be as a mate, starting with genes. "Good-genes theory posits that human judgments of physical attractiveness, particularly in mating contexts, have evolved to respond in part to heritable cues associated with health," explains Jason Weeden and John Sabini in their scientific review of the topic. As the theory goes, the better someone's genetic makeup, the more symmetrical and ideal their body becomes. But being a good potential mate isn't just dictated by our DNA. Current health status, ability to provide for young, and other variable factors also play a role in how fit a person is as a potential husband or wife. A woman can have all the good genes in the world, for example, but if she's starving, she won't have the fat reserves to feed a child, let alone survive pregnancy. So, it makes sense that in times of hardship, men would prefer women better equipped to handle times of scarcity - and by better equipped, I mean with fat reserves. "A primary function of adipose tissue is the storage of calories, which in turn suggests that body fat is a reliable predictor of food availability," explain co-authors Viren Swami and Martin J. Tovée in their PLoS ONE paper released today. "In situations marked by resource uncertainty, therefore, individuals should come to idealise heavier individuals." But do times of hardship actually shift body size preferences? Science to date has supported this hypothesis, as hungrier and poorer men prefer larger women. But what Swami and Tovée wanted to know was whether the stress had to be related to food scarcity. What about other kinds of stress? Does stress in general shift preferences, or only hardship? So, the team took college men and had half of them perform a stressful task unrelated to food or money which raised their cortisol levels. They then asked the stressed and unstressed men to take a look at some images of women, and rate their attractiveness. The images varied in body size, from underweight to obese. Finally, they recorded the participants own weight, height, and hunger status, as controlling variables. The results were clear. The stressed out guys preferred a larger body size than their relaxed counterparts - but that was not all. "Men experiencing stress not only perceive a heavier female body size as maximally attractive, but also more positively perceive heavier female body sizes and have a wider range of body sizes considered physically attractive," explain the authors. The wider range of preference was notably one-sided. "This difference was driven by the shift in the experimental group’s upper limit of attractive female bodies," the authors write. "While there was no significant difference in the lower end of the range, the experimental group appear to have shifted the maximum cut-off for attractive bodies at higher BMIs, which resulted in their wider attractiveness range." Why did the stressed-out guys prefer weightier women? Because, evolutionarily, more weight means better able to survive in tough times. "In contexts marked by prolonged stress as a result of resource deprivation, individuals may idealise larger body sizes because such body types are associated with better ability to handle environmental threat." These results are consistent with cross-cultural studies on attractiveness, which found that ideal body size varies by socioeconomic status and resource scarcity. In other words, our evolutionary past has affected why different cultures throughout the world have very different ideals when it comes to beauty. Nowadays, of course, the connection between body weight and ability to survive is uncoupled. Unlike our ancestors, Americans generally don't worry about having the fat reserves to chase down their next meal. Modern medical technologies and an abundance of high calorie foods have made surviving and reproducing much easier. But, this evolutionary leftover does raise some interesting questions about modern life, too. What are the full implications of an economic depression, for example? I wonder if cutting taxes affects what size girls end up with modeling contracts, or if the association goes both ways, and girls on a diet become less picky. More research will have to determine if stressed women prefer larger men, too, or how chronic stress instead of acute stress affects attractiveness ratings. Citation: Swami V, Tovée MJ (2012) The Impact of Psychological Stress on Men's Judgements of Female Body Size. PLoS ONE 7(8): e42593.