In July 2002, an Italian man named Mr Francioni found something strange. Francioni owns a marble-cutting company in the Tuscan town of Pietrasanta, and he had just acquired a block of Egyptian marbleized limestone. After slicing the block into six slabs, he discovered the fossilised bones of an animal within. Fossils weaken the strength of cut stone and many people discard them outright. But Francioni was excited: he thought he had found a dinosaur, and contacted the nearby University of Pisa. He got through to Giovanni Bianucci. “As soon as I saw the slabs, I realized that the finding was even more important than a dinosaur, at least for me. I study marine mammals,” he says. Bianucci realised that the bones belonged to an archaeocete, one of the predecessors of modern whales and dolphins. The story might have ended there: Francioni already had an offer from a foreign private collector, who wanted to slabs for his living room. Thankfully, Pisa’s local government intervened. They bought the fossils for the University’s Natural History Museum, where they are now on permanent display. Meanwhile, Bianucci wanted to know more about the mystery animal. To do that, he needed to know how old the bones and where they came from. He only had one clue: the slabs were marketed as “Shaikh Fadl limestone”. Shaikh Fadl is a city in Upper Egypt, and by talking to a local professor, Bianucci discovered several limestone quarries in the Tarfa valley to the east of the city. He pinpointed their location with Google Earth and in January 2006, he travelled to the quarries with Philip Gingerich from the University of Michigan. The duo found that the local rocks, and the fossils within, are around 40 million years old. Bianucci and Gingerich named the animal Aegyptocetus tarfa (“Egyptian whale from Tarfa”). Its remains include a complete skull and most of its backbone and ribs. The bones had been hacked into six pieces, but because the cuts were so smooth, the duo could easily reconstruct the skeleton by adding small spacers between the slices.

skull was 68 centimetres long and it probably weighed around 650 kilograms. It was one of the protocetids, a group of early whales that included Maiacetus and Rodhocetus. These amphibious species still had powerful legs that could support them on land as well as powering them through water. The first of this group to be found – Protocetus – was also discovered at an Egyptian rock quarry by workmen who were extracting building stone. The construction industry, it seems, has long been laying the foundations for our understanding of prehistoric whales. “It’s a useful contribution,” says Erich Fitzgerald, who studies fossil whales, “but it isn't really going to change the way we think about whale evolution.” Fossil hunters have already amassed a beautiful collection of ancient whales that show how these animals evolved from hoofed, deer-like creatures to the swimming leviathans we know today. Nonetheless, new finds are still important for enriching this sequence. “Aegyptocetus tarfa is a new piece in a puzzle that we still only know in outline,” says Gingerich. He hopes to find other similar fossils in Egyptian limestone, where bones are often preserved in top condition. Hans Thewissen, a fossil whale specialist, says, “I think that this is a really neat, excellently preserved specimen,” although he is sad that the skeleton doesn’t include the limbs or anything behind the ribs. “That is probably the most interesting part of protocetid anatomy because it is very poorly known in other protocetids.” The limbs may be missing but Aegyptocetus’s skull still holds valuable information about the transition from land to sea. For a start, the snout at the front of the skull slopes downwards – a feature known as “clinorhynchy”. Modern whales show the same shape but most ancient species have straighter skulls. No one knows what the slope does, and Gingerich thinks that a closer analysis of Aegyptocetus’s bones may suggest and answer. For instance, it’s possible that the downward slope changed the animal’s sense of hearing. Indeed, Aegyptocetus’s skull had several adaptations for hearing in the water, which might have allowed it to track and hunt fish. The skull is slightly asymmetrical, a feature that would become more pronounced in later whales, helping them to detect the direction of rebounding echoes in the water. The jawbone also had a large mandibular canal, an opening that helps channel sound to the ears. Hearing aside, Aegyptocetus also had a well-developed sense of smell, something that modern whales do not. Its nose contained turbinates, curled pieces of bone that support the cells needed to detect airborne scents. They’re testament to its amphibious lifestyle – they wouldn’t have done it any good in the sea, but they probably helped it to detect pheromones and other odours on land. Aegyptocetus’s bones also suggest how it died. Four of the ribs contain the tooth marks of a shark, which must have swum upwards at the animal and bitten it on its left flank. Today’s great white shark uses the same strategy, and other fossil whales bear the marks of similar attacks. “It seems probable that the shark attack killed the whale because there is no sign of healing”, says Gingerich. “However, it is also possible that the shark attack was on a whale dying or dead for some other reason.” Either way, the shark helped to seal the Aegyptocetus’s fate, condemning it to the ocean’s sediments, only for an Italian marble-cutter to find it 40 million years later. Reference: Biannucci and Gingerich. 2011. Aegyptocetus tarfa, n. gen. et sp. (Mammalia, Cetacea), from the middle Eocene of Egypt: clinorhynchy, olfaction and hearing in a protocetid whale. Journal of Vertebrate Palaeontology, citation tbc. More on prehistoric whales: 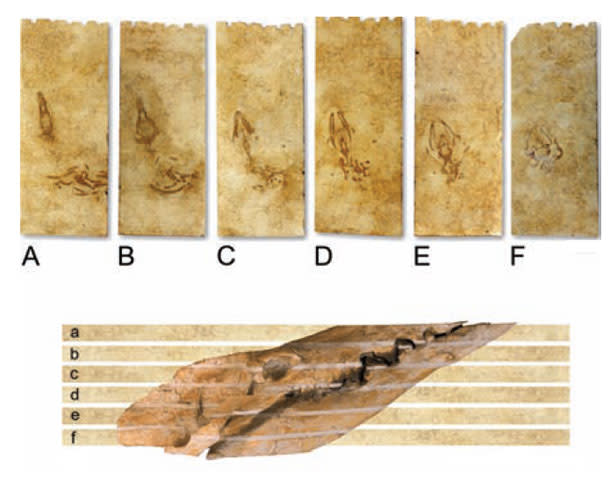