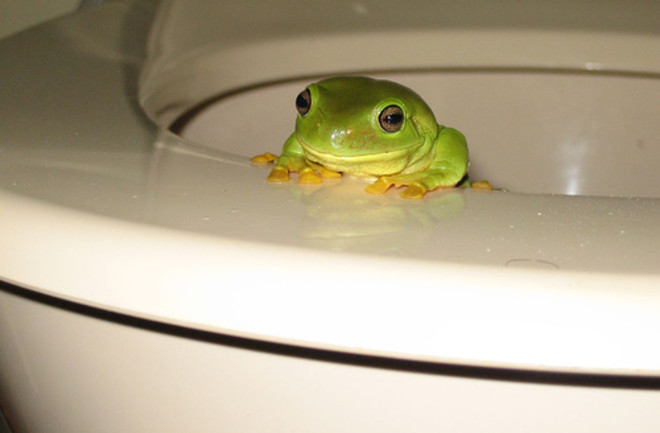 Unlike Spider-Man, who apparently uses static electricity to climb walls, tree frogs use sticky secretions. This sounds like a good idea, until you try it yourself with duct tape and fall off the wall of your house once the tape gets covered in peeled-off house paint. (Not that we've tried that or anything.) So how do tree frogs keep their feet sticky? Well, it turns out that the frogs' feet become stickier the more they use them, perhaps by flushing out the no-longer-sticky mucus.

Self-cleaning in tree frog toe pads; a mechanism for recovering from contamination without the need for grooming. "Tree frogs use adhesive toe pads for climbing on a variety of surfaces. They rely on wet adhesion, which is aided by the secretion of mucus. In nature, the pads will undoubtedly get contaminated regularly through usage, but appear to maintain their stickiness over time. Here, we show in two experiments that the toe pads of White's tree frogs (Litoria caerulea) quickly recover from contamination through a self-cleaning mechanism. We compared adhesive forces prior to and after contamination of (1) the whole animal on a rotatable platform and (2) individual toe pads in restrained frogs mimicking individual steps using a motorised stage. In both cases, the adhesive forces recovered after a few steps but this took significantly longer in single toe pad experiments from restrained frogs, showing that use of the pads increases recovery. We propose that both shear movements and a 'flushing' effect of the secreted mucus play an important role in shedding particles/contaminants."

Discoblog: NCBI ROFL: These boots were made for walking, and have a decreased balance performance compared with tennis shoes.