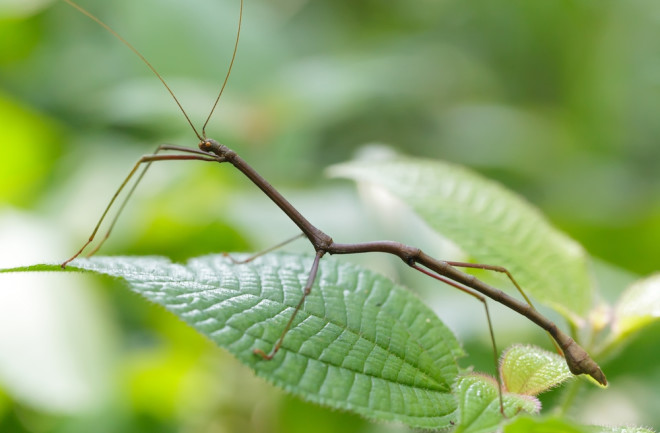 Most of a stick insect’s life is spent in a circle of trees and bushes, even for those species with wings. The insect would have an evolutionary advantage if it could disperse its young more widely. But with twig-like legs and wimpy flappers, the insect is not going to get too far. Some plants use wind, water and birds to disperse their seeds. For those favoring avian-mediated transport, the seeds are eaten, the birds fly away and eventually poop. The seed germinates into a plant at a distant site. Stick insects (i.e., plasmids, in the order Phasmatodea) might use birds in a similar manner. But how are the eggs able to survive a bird’s acidic digestive tract? The study points out that the eggs are coated in calcium oxalate, a compound that’s somewhat resistant to digestive acid. Three years ago, Kenji Suetsugu, a biologist at Kobe University in Japan and lead author of the study, fed 145 eggs from three different species of stick insects to birds. Around 7 percent of the eggs were undamaged by the digestive trip. But none of the eggs hatched. Suetsugu says that, though the eggs weren’t crushed, temperature and chemical issues might be why they died. The calcium coating, it turns out, is not impervious.

Undaunted, Suetsugu put together another study in 2017. He and his team fed 70 eggs of the stick insect species Ramulus irregulariterdentatus to a bird common in Japan. Fourteen eggs survived the rigor of digestion. Two hatched into stick insects. Based on this, Suetsugu proposes that eggs in a pregnant female stick insect eaten by a bird could, at least theoretically, survive the ordeal. Still, two egg survivors out of 70 seems like poor odds. But in the world of nature, even rare success holds dividends. That would be the case here, Suetsugu says. “Considering that stick insects are slow-moving and often flightless, with a limited capacity for dispersal,” he says, “the effect of long-distance dispersal via bird predation should not be underestimated.”