Steve Irwin's Last Gift to Croc Science: A Study of Their Surfing Habits 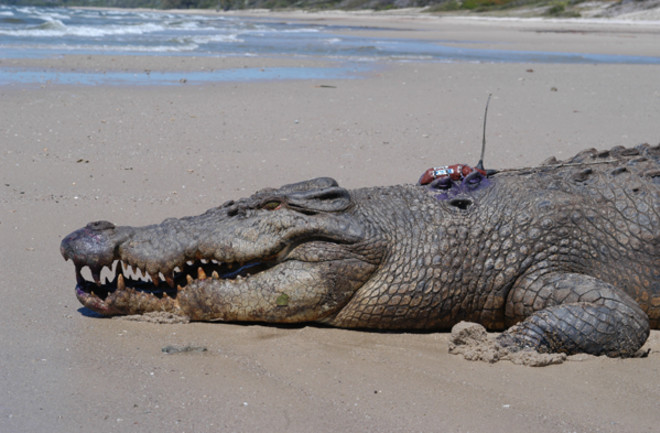 Crocodiles like to lurk in the shallows, preparing to pounce. They are not, as a general rule, strong enough swimmers to go on extended ocean cruises whenever they feel like it. Despite this, these creatures managed to reach islands across the South Pacific. How? Surfing. A group of scientists led by Craig Franklin, and including the late "Crocodile Hunter" Steve Irwin, studied saltwater crocs from the Kennedy River area of Northeastern Australia for about a year for a study forthcoming in the Journal of Animal Ecology. The team tagged 20 animals with receivers to give both their position and body temperature.

They found that eight crocodiles undertook a total of 42 long-distance journeys of more than 10 kilometres [6.2 miles] per day. In 96% of these trips, the reptiles traveled with the current flow. In contrast, the crocodiles were equally likely to travel with and against the current flow when making short journeys [Nature].

The body temperature reading gave the scientists another way to verify this, besides matching croc travel habits to changing ocean currents. When the tide went against the crocs, they just hung out on the beach and their body temperature rose to 90 degrees F as they soaked up the sun. However, when the current became favorable and they went traveling, their temperatures descended to more like 77 degrees. These researchers weren't even interested in crocodile migration patterns when they started out. But they couldn't ignore what they found about the creature's ability to read the flow of the ocean and travel only when it would be most efficient for them. So they looked at some historical data of tagged crocs swimming in the open sea.

One satellite-tagged crocodile, 12.6-foot-long male (3.8 meters) — left the Kennedy River and travelled 366 miles (590 km) over 25 days, timing its journey to coincide with a seasonal current system that develops in the Gulf of Carpentaria. Another croc — a 15.8-foot-long male (4.8 meters) — traveled more than 255 miles (411 km) in only 20 days through the Torres Straits, which are notorious for strong water currents [MSNBC].

According to the University of Queensland press release: "The late Steve Irwin, the original Crocodile Hunter, developed innovative capture techniques of crocodiles

to ensure the Australia Zoo team were 100 percent safe. Steve was instrumental in the strategies developed to minimize stress on crocodiles throughout the research and he was integral to the success of the research project." Related Content: 80beats: Found: Dino-Munching Crocodiles Who Swam in the Sahara

80beats: Baby Crocs Call Mom From Inside Their Eggs

Discoblog: Crocs Chow Down on Invasive Toads, Instantly Regret It