"State of the Birds" Report; and Is Climate Change Shrinking Avians? 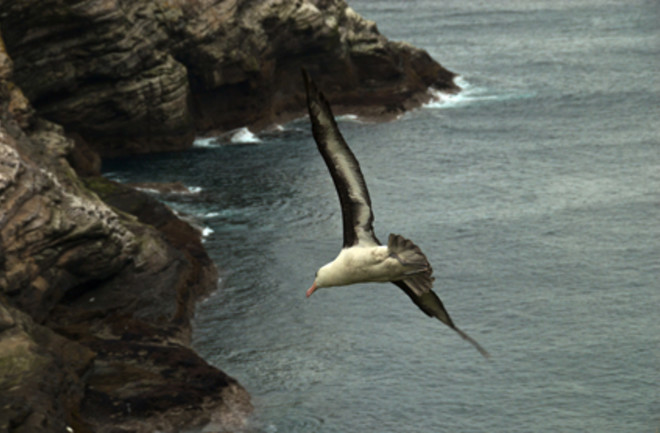 This week the federal government released its 2010 report, "The State of the Birds," examining the health of the United States' native fowl. According to Interior Secretary Ken Salazar, the state of our union's birds is precarious. The 2010 report focused on climate in particular.

You can see the methods for scoring here. Birds that rely on coastal areas are in the most threatened position, Salazar says.

In it, scientists reviewed data for 800 species nationwide, and ranked their sensitivity to climate change based on factors including how many young they produce each year, how able they are to move to new habitats, and how unique their food and nesting needs are [San Jose Mercury News]

. Each of the 800 then received a designation of low, medium, or high vulnerability.

Seabirds tend to have low reproductive potential and often nest on islands that can be inundated by rising sea levels, changes in water chemistry and other disruptions to the marine ecosystem [AP]

. Hawaii birds are especially troubled, as they many are already under the gun by invasive species and disease, the report says. All 67 species of ocean-reliant seabirds ranked with a medium or high level of vulnerability. Birds native to forests or to arid regions, however, showed less climate vulnerability. Kenneth Rosenberg of Cornell University's Lab of Ornithology, a contributor to the report, says,

"Birds are excellent indicators of the health of our environment, and right now they are telling us an important story about climate change. Many species of conservation concern will face heightened threats, giving us an increased sense of urgency to protect and conserve vital bird habitat" [AFP]

. Scientists from the U.S. Geological Survey, Forest Service, and other organizations compiled the 2010 report (the full list at the bottom of the press release). Meanwhile, a separate study published in the journal Oikos found a different but interesting effect on American birds.

In biology, there is a general rule of thumb that animals tend to become smaller in warmer climates: an idea known as Bergmann's Rule [BBC News]

. Biologists aren't totally settled on why Bergmann's Rule should be so, but Josh Van Buskirk and colleagues wanted to see if that was happening in the United States over the past decades, as global warming has gradually increased temperatures. Luckily, the Carnegie Museum of Natural History in Rector, Pennsylvania, has kept measurements of hundreds of thousands of birds, coming from more than 100 different species, that migrated through the area since 1961. Van Buskirk found birds getting slightly smaller no matter their migratory season: 60 of 83 spring migrating species, 66 of 75 for autumn, 51 of 65 for summer, and 20 of 26 for winter. In a spot of good news, though, the study says that the populations of these birds aren't in decline, and are perhaps adapting to their changing world.

"So many of these species are apparently doing just fine, but the individual birds are becoming gradually smaller nonetheless," says Dr Buskirk [BBC News]

. Related Content: 80beats: Tiny Tern Makes World-Record 44,000-Mile Migration 80beats: The Birds’ Sixth Sense: How They See Magnetic Fields 80beats: Like a Wool Sweater, Scottish Sheep Shrink As Climate Heats Up 80beats: Will All Animals Shrink Under a Warmer Climate DISCOVER: Works in Progress: How do migrating birds know where to go?