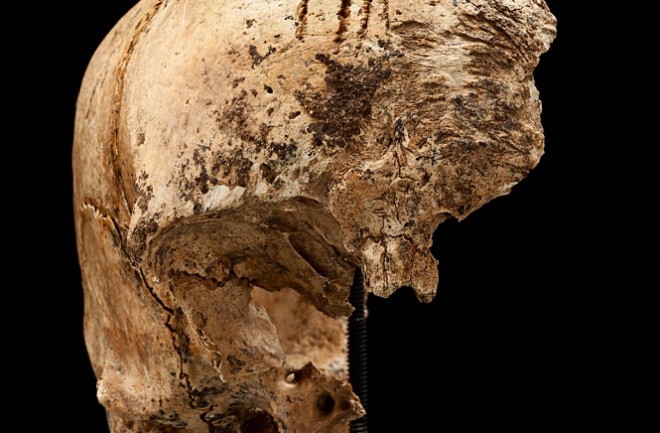 The incomplete skull is seen with four shallow chops. Courtesy Don Hurlbert, Smithsonian Just two years after colonists established the first permanent English settlement in the Americas at Jamestown, disaster struck. During the winter of 1609-1610, known as the “starving time,” about 80 percent of the colonists died. Accounts written at the time indicate that cannibalism was one way the survivors held on. Now, examination of remains of one young woman from the period provide the first physical evidence to confirm that some colonists ate the flesh of their deceased brethren. The incomplete human skull and tibia were excavated at the settlement's James Fort. Researchers determined they belonged to a girl approximately 14 years old; her cause of death was unclear. But after she died there is strong evidence that her flesh was forcibly removed, according to analysis by Douglas Owsley at the Smithsonian’s National Museum of Natural History. Owsley and his team found four shallow chops on the forehead that they say represent a failed attempt to open the skull. The back of the head appears to then have been struck by a series of forceful blows from a small hatchet or cleaver. The cranium was split in half, the left temple was stabbed possibly with a knife, and the implement was used to pry open the head and remove the brain.

Sharp cuts to the bottom of the mandible. Courtesy Don Hurlbert, Smithsonian Further sharp cuts on the jawbone reflect efforts to remove tissue from the face and cheeks using a knife. “The recovered bone fragments have unusually patterned cuts and chops that reflect tentativeness, trial and complete lack of experience in butchering animal remains," Owsley stated in a press release. "Nevertheless, the clear intent was to dismember the body, removing the brain and flesh from the face for consumption.” http://www.youtube.com/watch?feature=player_embedded&v=FGcN9_Gd5zQ#!